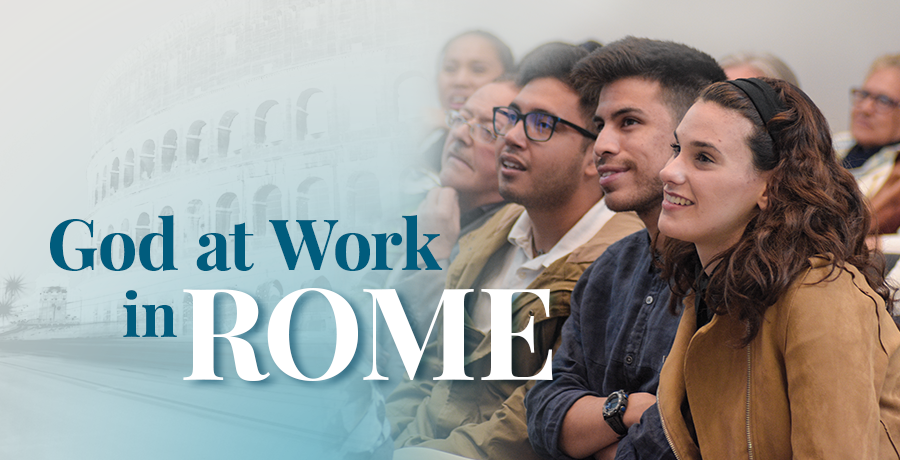 On May 19, the It Is Written evangelistic series in Rome, Italy ended on a high note: 27 baptisms and many more people preparing for baptism! This is the result of much work and prayer. These numbers really are phenomenal when you consider that this evangelistic series was just one mile from St. Peter’s Basilica.

Mariarosa Cavalieri, the local evangelism coordinator for this project, received her evangelism training at SALT, It Is Written’s evangelism training school. Returning home to Italy, she worked tirelessly for more than a year with the pastors and members of the four churches in Rome that were participating in this evangelistic outreach. 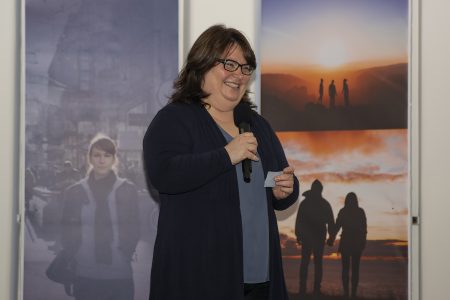 Behind the numbers are inspiring stories of people God had long ago prepared for such a time as this.

Marco had been drifting through life when he made contact with church members. They invited him to study the Bible, and as he did, Marco felt God calling him to surrender his life to Him and accept Jesus as His Savior. But life in Rome is filled with the distractions of a busy, bustling city, and Marco’s background in the Catholic church had left him feeling jaded towards religion. When Marco heard the message of the Bible, his heart was stirred. He met with the local church pastor and declared that he was ready to commit his life fully to Jesus. Marco was baptized on the final day of the evangelistic series.

When the Leone family attended It Is Written meetings in Rome eight years ago, the tires of their car were slashed. Refusing to be discouraged, they persevered in their faith, and during this It Is Written series they had reason to rejoice when their nineteen-year-old son, Giorgio, was baptized.

Three years ago in Moldova, Magdalena was diagnosed with a rare and potentially deadly disease. In order to receive the best medical care possible, Magdalena moved to Italy. While under treatment, she became acquainted with a Christian family and started taking Bible studies.This past January, after one year of intensive treatment, she was declared disease-free. Then in May, the family invited her to the It Is Written evangelistic series. At the end of Pastor John Bradshaw’s meetings, she was baptized. This has truly been a great year for Magdalena.

Jacob and Trust fled to Italy from Nigeria two years ago. They crossed the Mediterranean Sea from Africa to Italy crammed into a small boat. They described their experience from Nigeria as “horrific,” witnessing the beating and deaths of many people along the way. They arrived in Italy to a new life without fear and with the hope of a bright future and made friends with Christian believers who invited them to attend the It Is Written meetings. On May 19, both Jacob and Trust were baptized. Jacob is now considering becoming a pastor!

Julia grew up in the church in Brazil, but she drifted away from faith in God. Although she forgot about God, God never forgot Julia. Around the same time she started recognizing God’s voice, she connected with Sara, another Brazilian living in Rome. Sara was a member of one of the churches participating in the It Is Written evangelism project and invited Julia to attend. Julia attended with her atheist husband and was deeply affected by the moving of the Holy Spirit. Julia is now preparing for baptism! 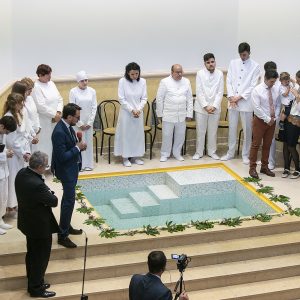 A local pastor prays with the candidates before baptism. 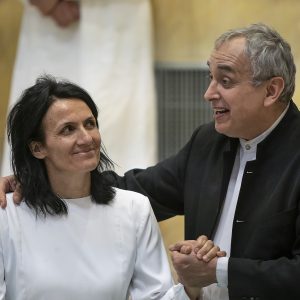 Baptisms were held at two sites on Sabbath. 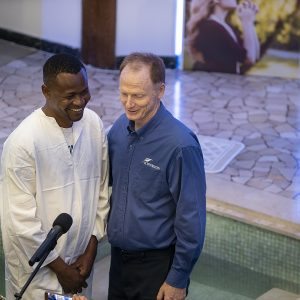 Those who were baptized came from near and far, including this man from Nigeria.

For a time such as this God brought It Is Written to Rome so that Marco, Giorgio, Magdalena, Jacob, Trust, Julia, and many others could be blessed by the refreshing word of God. Even though our meetings are now over, the work is far from done. Mariarosa, the pastors, and the church members in Rome are committed to keeping the momentum going. They are so thankful for the “push” they have received in a place where evangelism is very difficult. As Mariarosa said, “God has brought us closer to one another and has motivated us to serve Him more.”

The best is yet to come in Rome and beyond.

Rosa, who lives across the street from a church in Rome, had noticed that the people going to that church were a little different. Good different. The members and their children were courteous and always respectful of their neighbors. And there was also something special about the way they interacted with one another. “Nice people,” she thought. And so for years, Rosa watched with an ever-growing desire to connect with the people of that church. What they had, she desired. And one day, it happened. She was standing in front of her apartment building talking to a neighbor when a church member politely approached them and gave them an invitation to a special series of meetings: “The Future Is a Beautiful Story” with Pastor John Bradshaw. 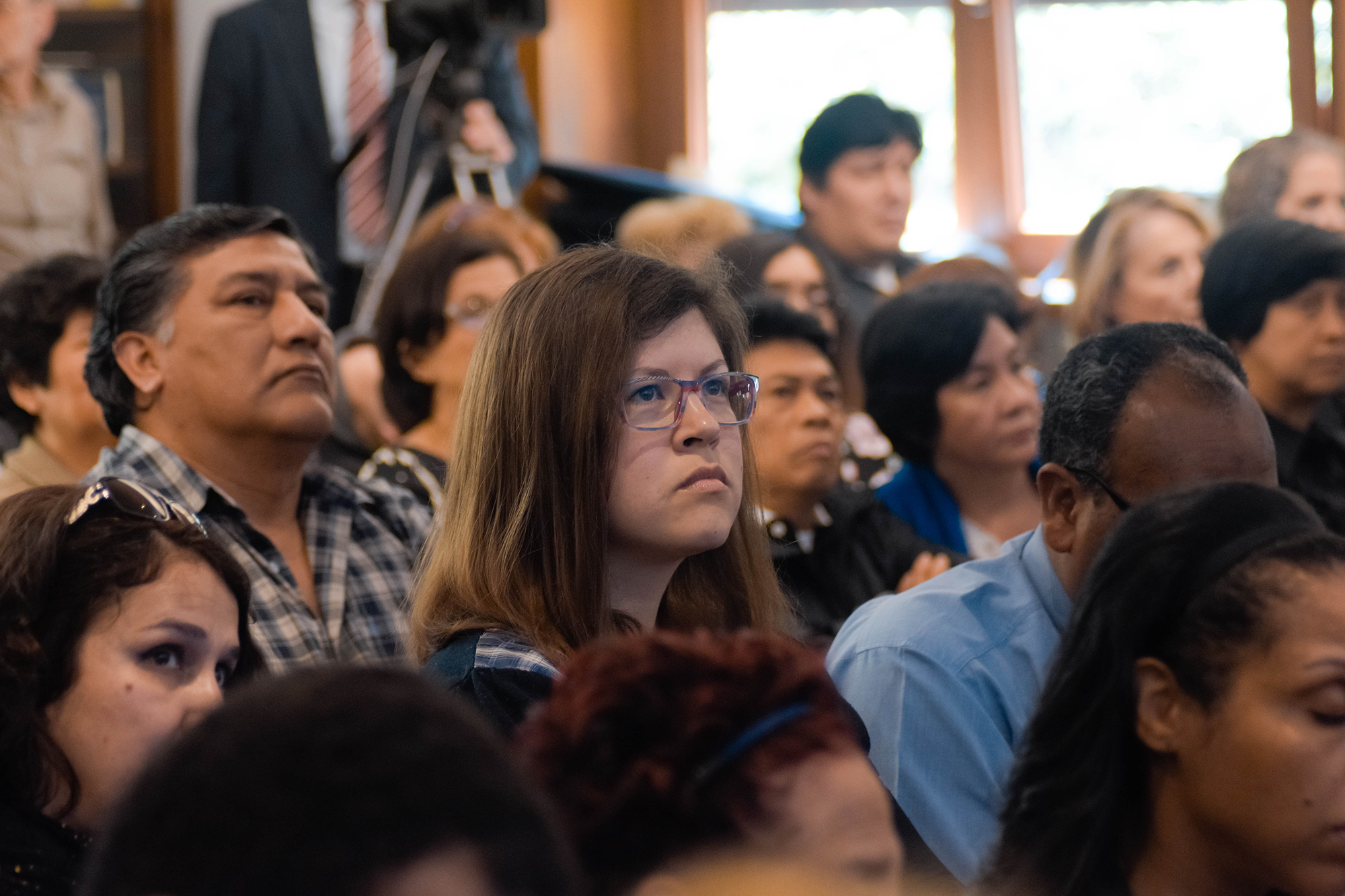 The audience listens intently as Pastor John Bradshaw and his translator present the evening message.

Unlike most people who simply throw away handbills, Rosa excitedly returned to her apartment clutching the invitation. She finally had connected with one of the people at the church, and they had invited her to one of their programs! With great anticipation, she decided to go, and she was not disappointed. John Bradshaw that night preached on the glorious return of Jesus. Wow! Rosa had never heard anything like this before. Her heart was filled with joy.

Rosa is not the only one whose life is being transformed by what she is hearing. Burnt-out church members, young adults, and silver-haired elders are among the many who, on a nightly basis, are being refreshed by the powerful Word of God. One of the attendees is a gentleman who drives 120 miles one way to hear the messages. Someone told him he could watch it all online and didn’t have to drive. He responded, “It’s not the same thing as being there in person.” 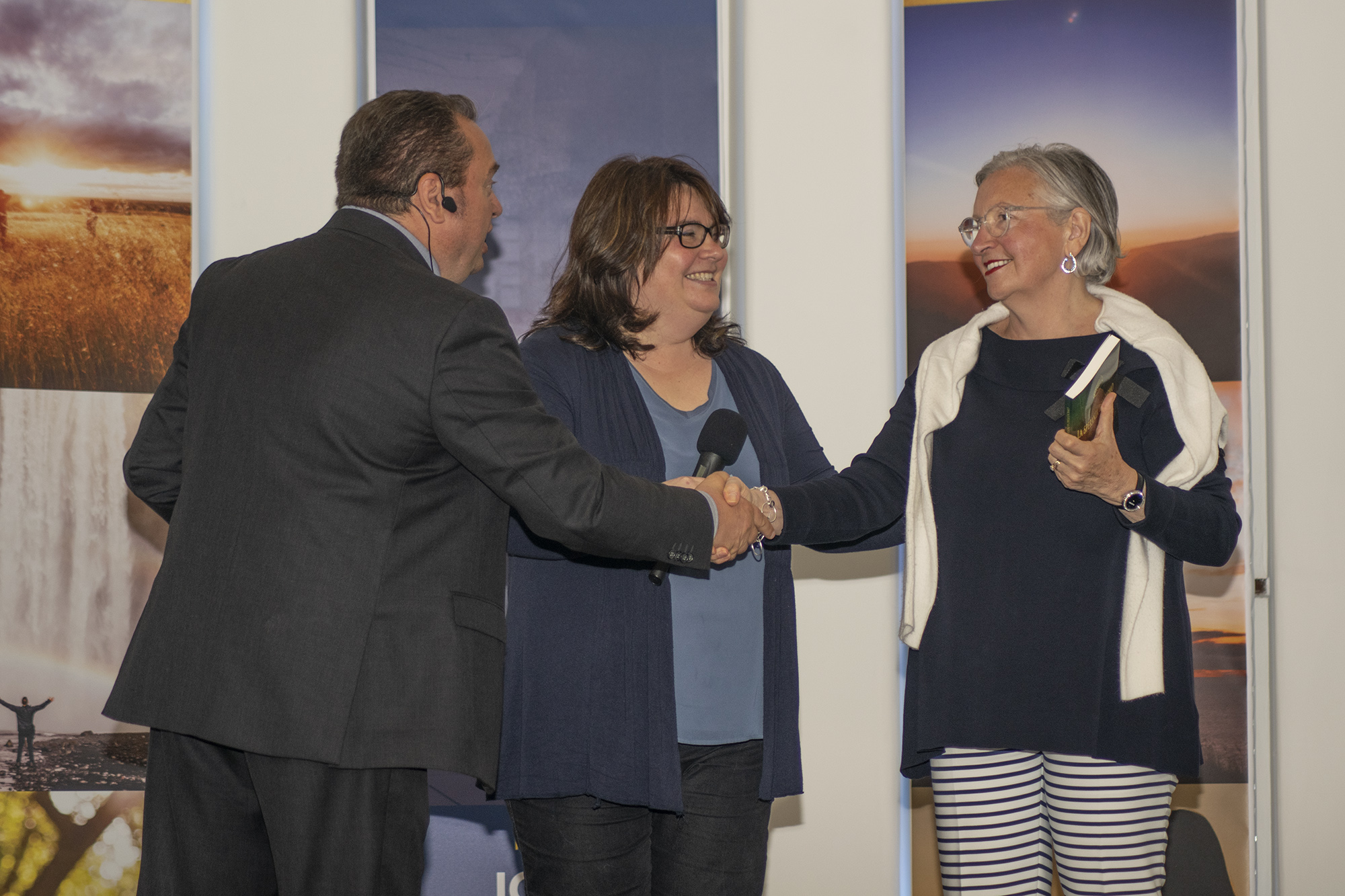 Each night a book is given to an audience member.

Please pray for all of these precious people attending our meetings. They are hearing wonderful truths and its turning their world upside down or, actually, right side up. Many of them are gearing up for baptism next weekend. Also remember that there are people in your own community, just like Rosa, who are watching and waiting for an invitation to hear the good news of God’s love for them.

Amelia’s life was spiraling out of control because of repeated bad decisions. She’d been away from God for over 20 years. A few weeks ago, she woke up in the middle of the night with a deep impression that God was calling her. Moved that God still had an interest in her, Amelia told her Christian sister about the nighttime encounter. That’s when her sister invited her to a series of Bible presentations at her church entitled, “Il Futuro É Una Storia Belissima” (The Future Is a Beautiful Story) with Pastor John Bradshaw. The first presentation particularly touched her heart as Pastor John talked about his own journey and how he found peace and joy in God. Amelia later confided to her sister that it was so fortunate that this Bible series is happening just after her nighttime encounter with God.

Fortunate? We don’t think so. It’s by divine appointment that Pastor John is presently in Rome, Italy, and that Amelia, like many others, is attending this eye-opening two-week series. Every night so far, the church has been full of people from all walks of life and different cultures with one thing in common: a desire to genuinely know God’s will for their lives. 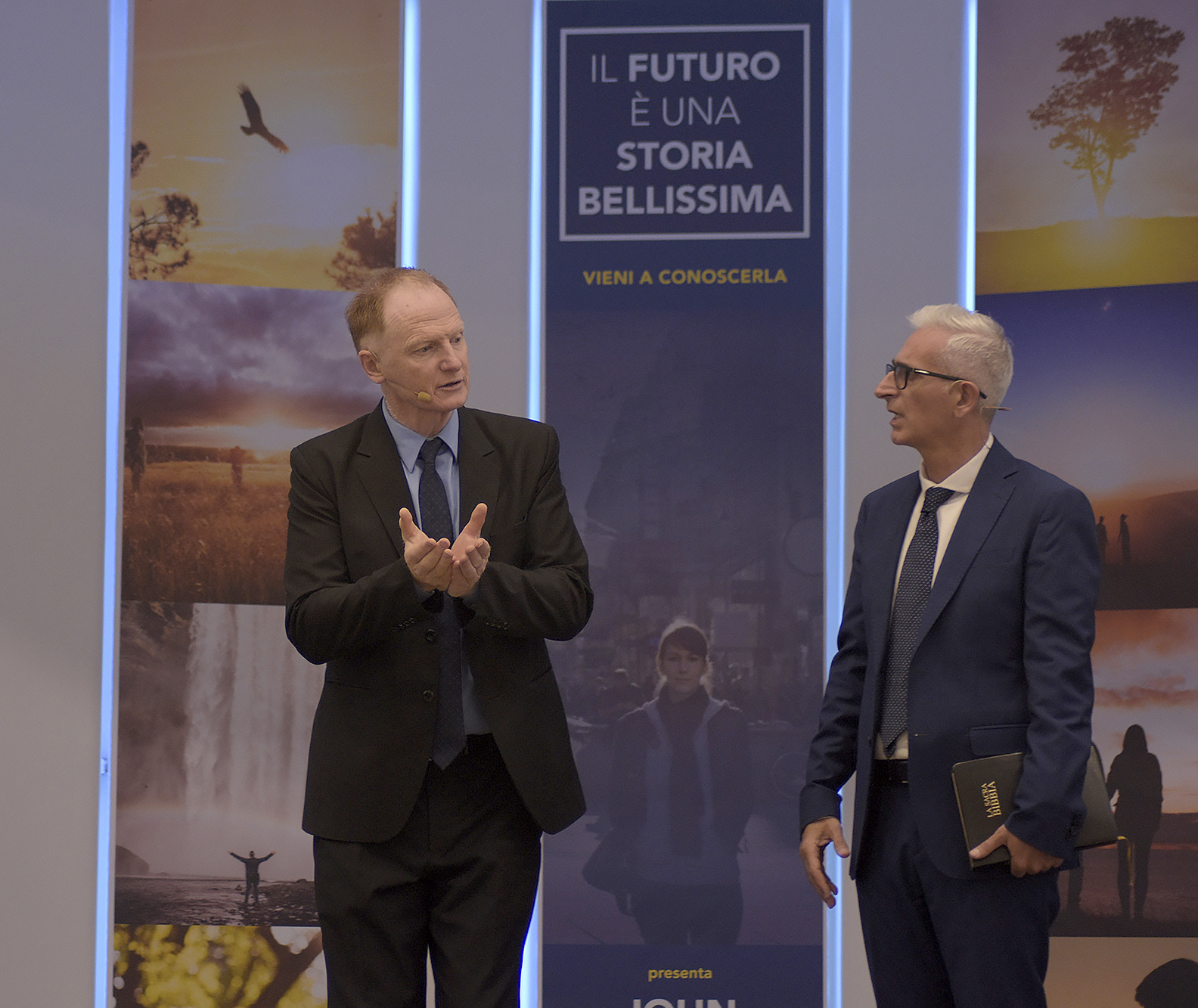 Pastor John Bradshaw and his translator, Gianfranco Irrera, present at the church on weekends. 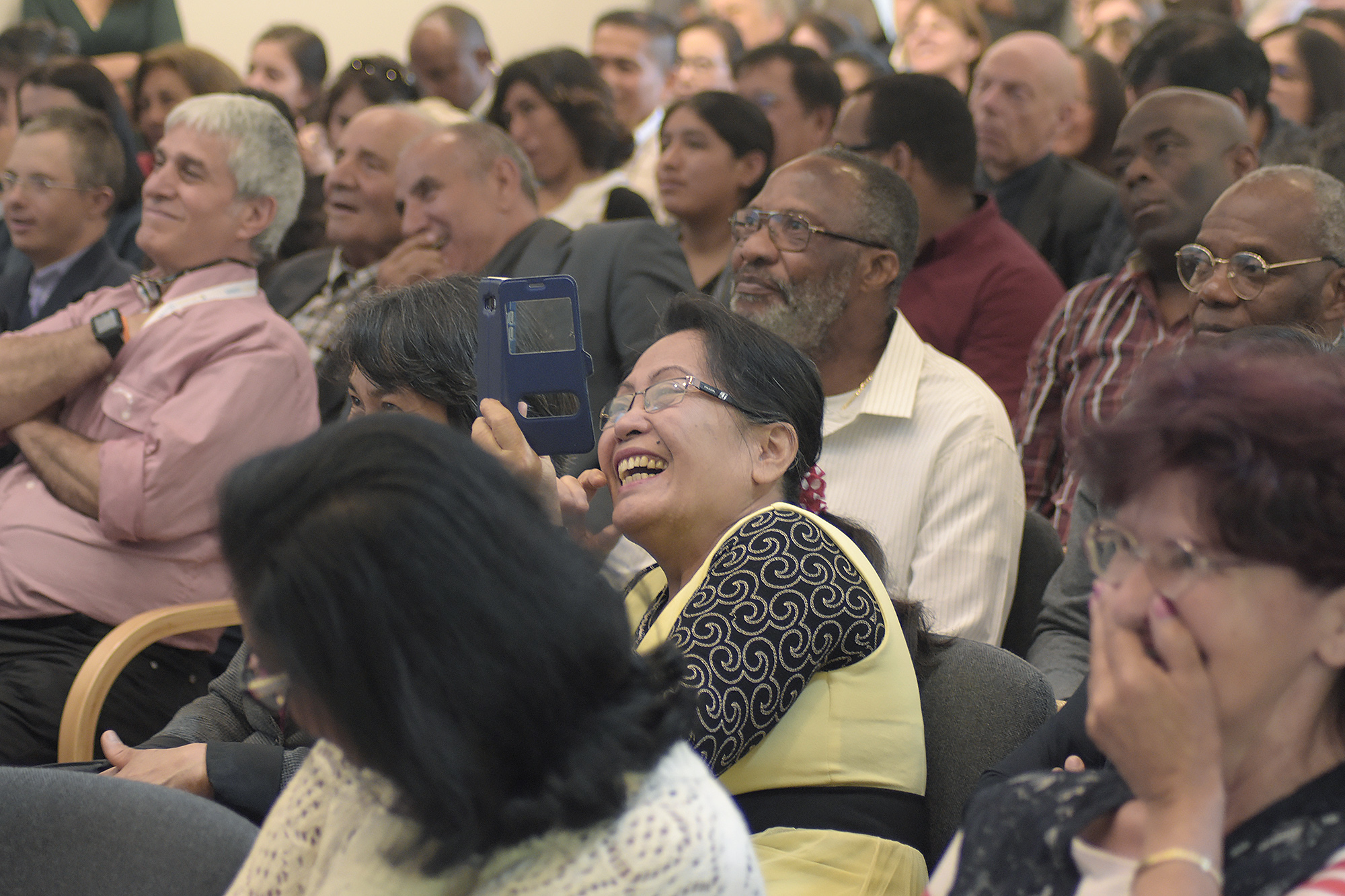 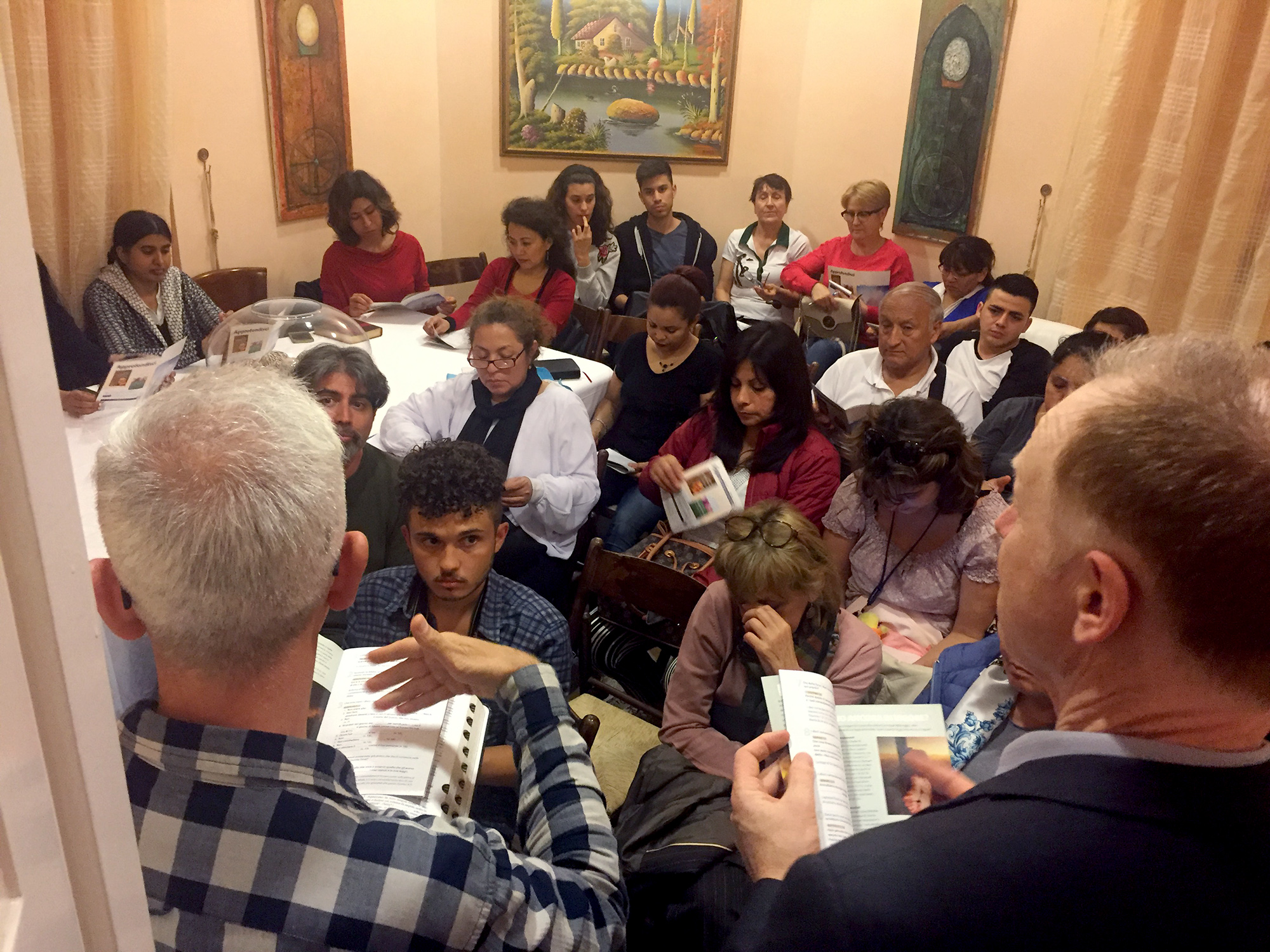 Home meetings are off to a great start!

Of course where good things are happening, the devil has to show up and attempt to disrupt it all. He almost succeeded on opening night. Before the meeting started, all the technology (video and audio) worked seamlessly. Everything had been tested multiple times. However, when the meeting started the video projector ceased to function. The tech guys did all the stuff tech guys do but to no avail. Thank God there was a second video projector in the building that was quickly connected and the program forged ahead. Bad luck? No. The enemy of God at work. But where God is present, the devil will never prevail.

Instead of doing the meetings at the church during the week, we are doing them in people’s homes across the city. Why? After a long day’s work it’s more convenient for people to go to a place near their home. Last night we were at the home of Carlo and Lucia. We weren’t sure what to expect. To our astounding surprise, over 60 people squeezed into an apartment to hear Pastor John teach (the photo doesn’t show the people behind John and in the other room). People in Rome are hungry for the Word of God.

Please keep our meetings in your prayers.  And please remember Amelia and all the guests searching and seeking a better life in Christ. Our meetings run every night until May 19.