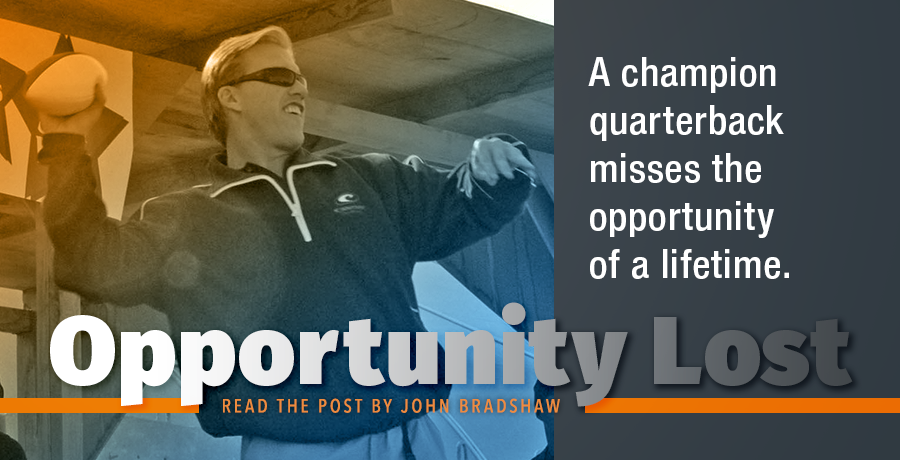 An interesting story emerged as a sideline to the recent Super Bowl 50 football game played between the Carolina Panthers and the Denver Broncos.

John Elway, now Denver’s General Manager and the winner of two Super Bowls as a player with Denver, was once made an extremely generous offer by the majority owner of the franchise.

In 1998, Pat Bowlen offered Elway the chance to buy 10 percent of the Broncos for $15 million. Additionally, Elway was offered a further 10 percent of the organization for foregoing $21 million of deferred salary.

It was a no-lose deal. Even if Elway decided to sell his share of the Broncos at a later time the Broncos would buy it back for $5 million more than he paid, plus 8 percent interest per year. And to sweeten the deal, John Elway would have the first right of refusal to buy more of the team should the Bowlen family choose to sell.

$36 million—$15 million of it cash—for 20 percent of a successful professional football franchise. Elway, as a successful player and investor, had the money to do the deal.

Today, Elway’s stake in the team would be worth $388 million. Except that it is not his.

Elway didn’t do the deal.

The opportunity of a lifetime—from a football/business point of view—went begging. And as sure as night follows day, it won’t come around again. Today, John Elway is a paid employee of the Broncos organization, and not an owner.

I’m certain Elway isn’t asking anyone to pity him. Financially he’s in a very sound position and one would assume happy with the way his career has played out. But the story reminds us that there are opportunities you really don’t want to waste. And never is that more true than when dealing with your spiritual life.

There are a couple of accounts in the Bible that make the point crystal clear.

In Matthew 19, a young man asks Jesus a deep question: “Good Master, what good thing shall I do, that I may have eternal life?” (Matthew 19:16).

The question itself betrays an unfortunate misunderstanding of both the plan of salvation and the character of God. Salvation isn’t granted according to anything we ‘do’, like a pay check is earned after a hard day’s work. Yet Jesus opted to meet the man on his own ground, and answered by listing a number of the ten commandments, saying, “If you want to enter into life, keep the commandments” (verse 17).

He pressed on. “If you want to be perfect, go, sell what you have and give to the poor, and you will have treasure in heaven; and come, follow Me.” This was a bridge too far for the rich young ruler. Considering his goods to be his gods, he turned away from Jesus and spurned the opportunity of a lifetime.

It was a simple proposition. “Get your priorities right and you’ll be standing on spiritually solid ground. But considering anything to be more important than God is spiritually disastrous.”

Easy enough? In theory. But covetousness is so strong an allurement, self-interest so intoxicating, that the young man compared everlasting life with his possessions and figured his possessions were a better deal. Madness? Of the worst kind. Jesus offered him everything. He chose instead what amounted to be nothing.

In Acts 26, the apostle Paul stands before a young king named Agrippa and recounted his Damascus Road experience. Appealing to Agrippa’s heart for the sake of the cross, Paul asks, “King Agrippa, do you believe the prophets?” Knowing of Agrippa’s familiarity with the Scriptures and the conviction he was under, Paul didn’t even wait for an answer from the Jewish king. “I know that you do believe,” he asserted (Acts 26:27).

Agrippa was moved, but in his moment of opportunity hardened his heart instead of choosing to yield to God’s drawing. He answered, “You almost persuade me to become a Christian” (verse 28).

Almost persuaded. The 18th Century hymn writer Philip Paul Bliss (who also wrote the tune to ‘It Is Well With My Soul’) wrote a hymn by that name. The final verse is as sober a verse as you’re ever likely to hear:

Almost persuaded, harvest is past!

Almost is but to fail!

In the grand scheme of things, it matters nothing that John Elway didn’t buy a share of a football team. But to miss out on the greatest deal of all time—your heart handed over to God, Jesus’ own righteousness and the gift of eternal life given to you—will matter for all time.

God makes it so simple. Make room for Him in your life now and He’ll make room for you in His plans for eternity.