Feb 2016
AUTHOR admin
NEXT POSTEasier Than You Think—Sharing your faith doesn’t have to be difficult!
PREVIOUS POSTOpportunity Lost

A friend of mine messaged me. “We’re getting to that age.” And apparently we are.

I haven’t had many close friends die. I’m still too young, thankfully. But that seems to be changing.

While my next oldest brother lost a gaggle of friends in car accidents while he was still a teenager, I didn’t. One elementary school friend died in a car crash after our paths had long diverged, and a high school classmate I didn’t really have anything to do with died in a wreck just after he left school. And while that’s obviously tragic on many levels, I hadn’t really ever lost a close friend.

While I was overseas on a speaking appointment, someone suggested I visit Gavin*, in hospital for what I was told was something chronic but not terribly serious. I traveled miles out of my way to try to see my old friend, a groomsman in my wedding, who for years had been involved in various facets of ministry. After scouring one hospital, I was told he’d been transferred to another, where I was directed to the twelfth floor—the neurological ward. Huh?

I hadn’t seen my friend in nearly 20 years, but recognizing his brother—whom I’d never met—I knew I was in the right place. When I saw Gavin, he was in a coma. I spoke his name and he opened his eyes and looked into mine.

He never came out of the coma, and died a week later.

Those 20 years have passed by in a flash. How was it we never kept in touch? Thankfully, we’ll have eternity for that.

I wish I could have been at the funeral.

I was standing in a parking lot outside a hotel in Orlando when I received a call from an old friend and former colleague. She got to the point right away. “Breast cancer.” While her dark humor was in part a mask for her anxiety, it was mostly a reflection of her confidence. She expected cancer to be tough but had no doubt she’d come through.

Ten days later, an email from a friend of hers said the cancer had spread just about everywhere and that this would be a difficult journey. Nature took its course. Treatment only delayed the inevitable.

She had success in her career, then a career change, a daughter, various ups and downs. We both had been raised in the same denomination. She had what appeared to be an uneasy peace with God. And now she’s gone.

I wish I could have been at the funeral. 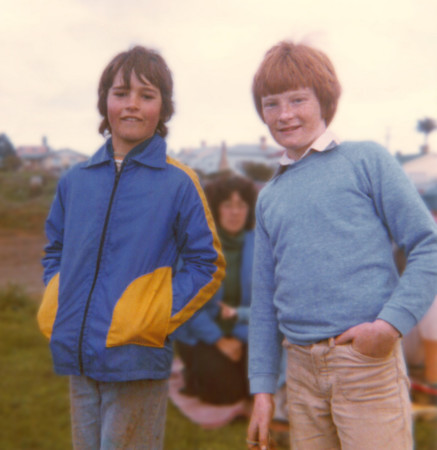 Simon* and myself around 10 years old at a rugby league park.

A couple of days ago I received a brief message from a close friend. “I don’t know if you heard Simon* has passed away.”

I hadn’t seen Simon in at least 30 years, but in our first couple of years of high school we were as close as two friends could be. We spent enormous amounts of time together—too much, according to my school attendance reports. We went through a lot of the typical and many of the regrettable teenage rites of passage together. For several years he was as close a friend as I had.

I was told it was either a massive heart attack or a stroke. At his age? Photos taken at a high school reunion showed that 30 years later he still looked fit and well, and had the same baby face.

I remember him telling me that as a kid he prayed that God—if He was real—would cause a Yamaha trail bike (a TT 250) to appear in his bedroom when he opened his eyes. He drove too fast, smoked too much, and laughed a lot. I always imagined I’d bump into him one day, somewhere, sooner or later. Surely.

My friend was right. My group is getting to that age. If you’ve walked this far along the road then you know how it feels when your friends start dying.  Life really isn’t a game. It’s one thing when someone’s grandma dies. It’s another when you start losing friends thirty-five-plus years short of the average life expectancy.

And what of eternity? As Shakespeare wrote, ah, there’s the rub. Consider that—and one must—and one’s meditations take on a solemn tone.

Life and death. Big questions. Now being asked of my generation with uncomfortable regularity.

Another friend gone. The photo I saw a few days ago showed him looking implausibly young, but graying at his temples. On the table in front of him was a packet of cigarettes—the warning message clearly visible—and a bottle of beer. I don’t know the circumstances, but it looked as though this was yet another unnecessary, avoidable death. A life cut way too short. There was still plenty of daylight between him and 50.

I wish I could be there for the funeral.

*Names and identifying details have been changed to protect the privacy of individuals.