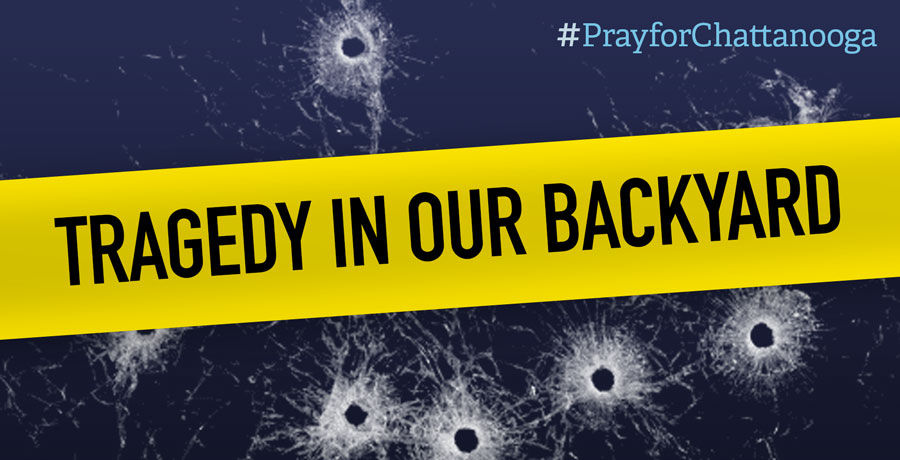 Perhaps one of the most surprising things about today’s tragedy in Chattanooga is that nobody I spoke to or heard really seemed surprised that it happened.
That’s not to say we expected this sort of thing to happen in our home town. Nobody “expects” this sort of thing to occur. But it’s a sad indictment of the times in which we live that when 4 people are murdered and a law enforcement official is injured and the perpetrator of the horrible crimes is “neutralized” (as the media reported) in a town generally considered a great place to live, that nobody said “this couldn’t happen here!”
Because in our heart of hearts we all know that something like this can happen here. Wherever “here” might be.
Chattanooga isn’t Detroit, or New Orleans, or Newark (depending on which list you read, the cities with the highest murder rates in the United States). This is Chattanooga, a city people are flocking to, the city with the blazing fast internet, the place where rock-climbers and cyclists and outdoorsy-types come to enjoy the blessings of nature, a city with a church on every street corner (or so it seems)… And yet here we are looking at each other and saying, “Yes, it happened here.”
You see, evil doesn’t discriminate. Satan isn’t looking for willing hearts in New York City, Los Angeles, and Chicago only. Humanity’s fall into sin affected all of humanity, and wherever there is a sinner disconnected from God and empty of the Holy Spirit, anything is possible. In my town, your town, or whatever town was once considered paradise.
Whenever a person—any person—chooses to go it alone without the indwelling presence of Christ, anything becomes possible as far as evil is concerned. It isn’t a matter of geography, of city or rural, black or white, or rich or poor. Evil is a matter of the heart, and anyone with a pulse and without a surrender to Jesus is ultimately powerless to resist the allure of evil.
Paul stated it clearly when he said in Romans 7:15, “For what I am doing, I do not understand. For what I will to do, that I do not practice; but what I hate, that I do.” Realizing he was stuck in sin and incapable of subduing his own corrupt heart, Paul cried out to God saying in verse 24, “Who will deliver me from this body of death?”
Now there’s a question. Who? Who can deliver a person from his or her own evil impulses? Who can subdue desires that virtually compel an individual to commit atrocities? Who could have given Muhammad Youssef Abdulazeez the presence of mind and the inner strength to let his anger go and channel his energies into something other than a tragedy of immense proportions?
In Romans 7:25, Paul provides the answer when he writes: “I thank God—through Jesus Christ our Lord!”
And there it is. Through Jesus, the human heart can be tamed. Through Jesus, a sinner can find deliverance from temptation. Through Jesus, the power of sin can be broken. Through Jesus—only through Jesus.
This afternoon our staff gathered to pray for those affected by what happened in Chattanooga. We’ve been affected at It Is Written, because this has happened in our own backyard. Our Associate Producer and our Sign Language Interpreter were filming Every Word devotionals just a few hundred yards from where the first shots were fired in this horrible drama. They were entirely safe the entire time, but the fact was they were within shouting distance of the unfolding of the worst criminal act to affect our city in years. We thank God that they were protected.
Yet several people were not. A police officer was injured, four Marines were murdered, and a criminal lost his life in a shoot-out with police. Tonight, there will be people crying themselves to sleep as a result of this crime. As a result of the outworking of evil. As a result of hearts not being submitted to the keeping of the Holy Spirit.
None of us are safe from the effects of sin, and none are above falling into sin if we are not yielded to God. Only in Christ are we secure from the effects, the presence of the power of sin.
“The name of the Lord is a strong tower. The righteous run to it and are safe” (Proverbs 18:10).