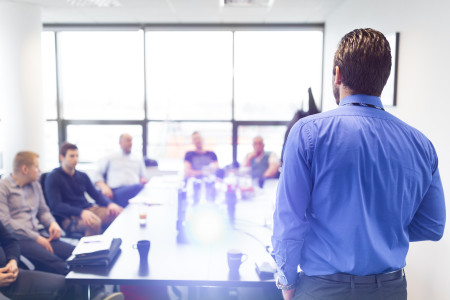 I read with interest a New York Times article titled, “The Bad Behavior of Visionary Leaders.” It discussed three giants of business and innovation: Elon Musk (who co-founded Pay Pal and is the brains behind Tesla automobiles and the Space X aerospace company), Jeff Bezos of Amazon and the late Steve Jobs, who turned Apple into, well, Apple.

All three men have breathed the rarified air of success at the highest levels. In their chosen fields they have achieved what many others would not have even attempted, and they were revolutionaries in their respective fields of endeavor.

However, beyond their brilliance—according to the New York Times article—the three men have one other thing in common. They are (or were) capable of being—in the opinion of people close to them—first-class jerks.

Steve Jobs’ biographer, Walter Isaacson says of Jobs, “Nasty was not necessary. It hindered him more than it helped him.” Jobs had a penchant for verbally abusing employees, for being ruthlessly hard as a boss, and frequently resorting to insults and put-downs.

The Times quoted one of Musk’s former associates as saying: “He can be so gentle and loyal, and then hard on people when it isn’t necessary.” Brad Stone, who wrote “The Everything Store,” a book about Jeff Bezos and Amazon wrote that Bezos “was capable of hyperbole and cruelty in these moments, and over the years delivered some devastating rebukes to employees.” In his review of Stone’s book, Duff McDonald wrote, “It’s hard to tell if anybody likes [Bezos].”

The following is from the aforementioned New York Times article, written by Tony Schwartz:

Mr. Jobs drove around without a license on his car, and he regularly parked in spaces reserved for the handicapped. As Mr. Ive said of his attitude, “I think he feels he has a liberty and a license to do that. The normal rules of social engagement, he feels, don’t apply to him.” Amazon employees collected examples of Mr. Bezos’s most eviscerating put-downs, including, “Are you lazy or just incompetent?” “Why are you wasting my life?” and “I’m sorry, did I take my stupid pills today?”

Jobs died in 2011 at the age of 56, and if Jesus doesn’t return first, Musk and Bezos will likewise “go the way of all the earth” (1 Kings 2:2). Musk is currently worth more than 13 billion dollars, while Bezos’ personal fortune is estimated to be almost 42 billion, making him the 15th richest person on the planet, positioned on the rich list between Mark Zuckerberg, and former New York City Mayor, Michael Bloomberg. But for all that, both Musk and Bezos are reportedly reviled by many of those who know them best.

Very clearly, the three men profiled in the article have more than their fair share of redeeming qualities. They are/were all outstanding businessmen who in many ways improved society and the lives of millions of people. All three have given millions of dollars to charity and have created thousands upon thousands of jobs.

Steve Jobs is now remembered for being brilliant, and a not-very-nice person. Bezos and Musk are apparently cut from the same cloth. Who wants to be remembered that way?

There’s no question that Steve Jobs, Elon Musk, and Jeff Bezos will all be remembered for being visionary leaders. But in terms of character, it could be that history will not smile upon them. Theirs may well be tarnished legacies.

It’s likely—from a human perspective—that there are reasons these man act the way they do. Most of us will never know the pressure of having thousands of employees depending on your ability to keep your company ahead of the pack. Most of us will never go to bed at night knowing that the decisions we made during the day could potentially cost a lot of people billions of dollars. Your company makes a bad decision and you have to rebuild a deck or repaint a kitchen. Elon Musk and Jeff Bezos make a bad decision and millions of people don’t get their orders on time or a space craft doesn’t survive takeoff. Big stuff.

However, that can’t really serve as an excuse. If it did, we’d all find reasons for the bad behavior we sometimes exhibit and we’d become more tolerant of it even as others grow less tolerant of us. How do you live in this world and operate under pressure, and still be nice?

Kindness: 1 Peter 2:23 (NKJV) says of Jesus, “Who, when He was reviled, did not revile in return; when He suffered, He did not threaten, but committed Himself to Him who judges righteously.” Jesus did not retaliate or seek to get even, because he was constantly surrendered to His heavenly Father.

Submission: Psalm 141:3. “Set a watch, o Lord, before my mouth; keep the door of my lips.” It’s important to pray that God will guard your tongue and guide you in what to say.

Humility: James 4:10. “Humble yourselves in the sight of the Lord, and he shall lift you up.” There’s no eternal future in pride, in putting yourself above another and failing to consider the feelings and concerns as others.

We might not all rise to the heights of a Steve Jobs, but we interact with others and affect those in our circle of influence. How will you be remembered? What sort of legacy will you leave? Remember—failure now does not guarantee failure tomorrow.  2 Corinthians 4:16 states, “Though our outward man perish, yet the inward man is renewed day by day.” Romans 12:2 invites us to be “transformed by the renewing of your mind.”