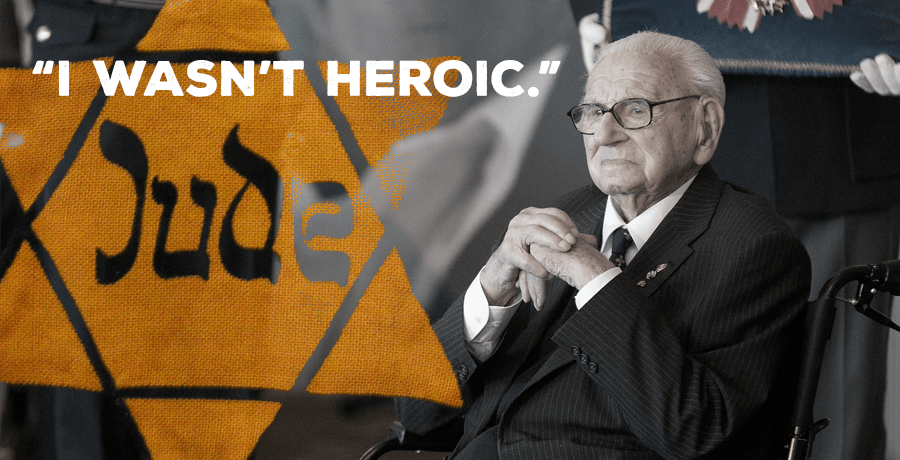 The town of Slough in the county of Berkshire is 36 minutes by train from Paddington Station in London, England. Slough isn’t a city, in spite of having a population of around 150,000. There are only 69 cities in all of Great Britain. A town can’t become a city in Britain except by royal decree, a process which is—unsurprisingly—complicated.

In 1937 the poet John Betjeman wrote this about Slough: “Come, friendly bombs and fall on Slough, It isn’t fit for humans now, There isn’t grass to graze a cow. Swarm over, death!” There was some considerable concern about Slough losing its rural character as factories sprung up and dotted its landscape, and certain individuals—poets among them—were unimpressed.

But just over a month ago, a 106-year-old man died in Slough, and if his longevity wasn’t remarkable enough, his life certainly was. Chances are you’ve never heard of him, and never would have heard of him if you hadn’t read this post, in spite of the fact that his actions almost eight decades ago saved the lives of hundreds of people. He was a hero, and for decades, an unknown hero.

In late 1938, Nicholas Winton was planning a skiing vacation in Switzerland. In answer to a friend’s request for help he changed his plans and went instead to Prague, the capital city of what was then Czechoslovakia. His friend had asked him to help him to work in behalf of Jews who were feeling Hitler’s noose tighten around their collective neck. The help he gave turned into an organization dedicated to saving at-risk Jewish children. Assisted by Britain’s House of Commons, Winton—facing a barrage of obstacles—arranged for 669 Jewish children to escape Czechoslovakia and find refuge in Britain.

One who paid tribute to Sir Nicholas Winton after his death was one of those very children who grew up in England as a result of Sir Nicholas’ remarkable work, and as an adult became a Member of the British Parliament. Sir Nicholas was often compared to Oskar Schindler, but he never liked the comparison. He said, “I wasn’t heroic. I was never in danger.” 669 children and their families—many of whom perished—might have disagreed with that statement.

But what’s interesting about Sir Nicholas Winton’s actions is that the world would never have known about what he did had his wife not stumbled across a scrapbook in their attic in 1988—half a century after the fact.

He died 76 years to the day after a train carrying the largest cargo of escaping children—241 of them—left Prague bound for freedom. For 50 years no one knew that this man had done what he had done. He was subsequently honored many times, by the British government, the Czech government and by the British royal family (in receiving a Knighthood). But for half a century nobody knew what he had done, except for himself, and he felt that that was enough.

The Bible is filled with remarkable accounts of the deeds of remarkable individuals. Samson. Moses. Jael (look that one up). Paul. Children sing songs about David, Abraham, Joshua, and Zacchaeus. But there are four individuals in the book of Mark who did something utterly remarkable, yet we don’t so much as know their names.

We read in Mark 2 that Jesus was in a house in Capernaum, a house so filled with people who had gathered to hear him speak that it wasn’t possible for a concerned group of men to get their ailing friend into Jesus’ presence. You’re familiar with the story—they open up the roof of the house and lower the man into the room where Jesus sat. He was subsequently healed by the Son of God. Remarkable! But there’s a key point in Mark 2 that’s worth considering. It’s in Mark 2:3.

“And they come unto him, bringing one sick of the palsy, which was borne of four.”

There was Jesus, the healer. There was the sick man, who was healed. But how was this miracle of healing made possible? Certainly by the power of God and nothing less. But it was facilitated by four nameless men who performed the heroic act of bringing their friend to Jesus.

We don’t know their identities, but we know their hearts. They cared for someone, enough to do something, which while not remarkable in itself—carrying the corner of a stretcher…anyone could do that—produced remarkable results.

They brought someone to Jesus. Now, they didn’t open up the Red Sea and they didn’t turn water to wine, neither did they heal a leper, nor did they cause an iron axehead to float on water. But they did something that which, while small in itself, resulted in the most remarkable thing of all—a converted human heart, a soul won to Christ and to His kingdom.

You might never save 669 children from death, and the likelihood is that you won’t ever kill a thousand men with the jawbone of a donkey (at least I hope not). But can you imagine yourself helping to carry a sick man or woman into the presence of Jesus? That’s something anyone could do.

It might not be that your deeds are ever feted. Even in the church it’s usually the more “spectacular” feats that are celebrated. But doing something for Jesus—no matter how small—to bring someone to faith in Him?

Even if your name is never mentioned, your work for Jesus will be seen by God, and appreciated through eternity.