Why Would Jesus Die for You? 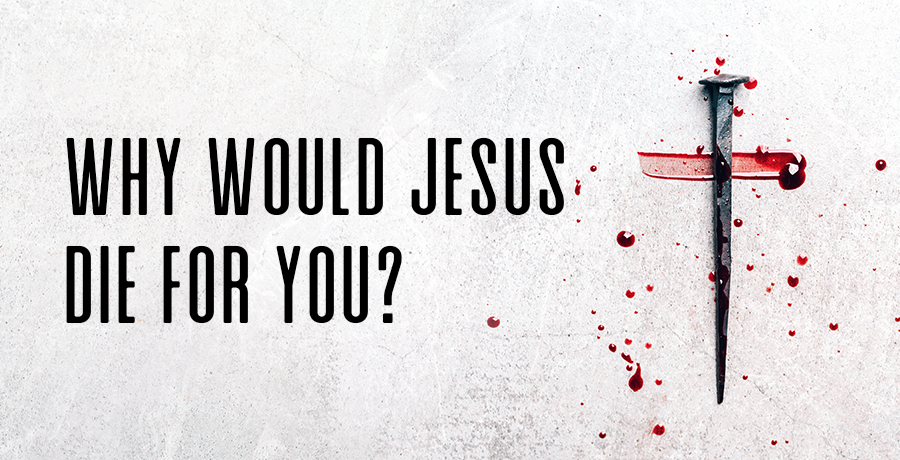 It’s a remarkable verse in a remarkable chapter. In a chapter loaded with power and promise, this one line seems to stand out somehow, expressing a thought unparalleled in its majesty.

Isaiah 53 deals with the life, ministry, and death of Jesus. The chapter is quoted in the New Testament by Matthew (Matthew 8:17), Mark (Mark 15:28), Luke (Luke 22:37; Acts 8:32-33), John (John 12:37-38), Paul (Romans 10:16), and Peter (1 Peter 2:24). The human subject of Isaiah 53 is sometimes referred to as the “suffering servant.” And while some may choose to question the identity of the chapter’s focus—among Jews there is no consensus on what the passage is about, with some suggesting the subject of Isaiah 53 is Isaiah himself, or Jeremiah—it is apparent to most Christian believers that this 2,700-year-old passage centers squarely upon Jesus.

According to Isaiah 53, Jesus would be unextraordinary (humanly speaking), despised, rejected, wounded, bruised, beaten, the sacrifice for sin, buried among the wicked, innocent, and yet considered a sinful man. Isaiah 53 is in large part the story of the first Easter weekend, when Jesus, as the true paschal sacrifice, gave His life to redeem a fallen world.

The story is too vast to distill into only a few paragraphs, but one thing stands out as we consider the events at Calvary 2,000 or so years ago. Jesus knew all about the circumstances of His death before He came to the earth. Jesus knew every word of Isaiah 53 before He left the security of heaven for the danger of a distant planet. Jesus knew. He knew He would be beaten. He knew He would be nailed to a cross. He knew the sin of the world would be placed upon Him. He knew He would come to His own, and His own would not receive Him. And knowing, He chose to come to this world and die as a sacrifice for sin. He knew He would be the victim of a nauseating miscarriage of justice and endure indescribable pain, and yet Jesus “laid down His life for us” (1 John 3:16).

Jesus understood the horrors of crucifixion. Victims would often be tied to the cross on which they died, but as David wrote in Psalm 22:16, Jesus would be nailed to the cross, “cursed” as He hung there (Galatians 3:13), His life slowly draining away. Archaeological evidence suggests that the nails would have been driven through his ankles and wrists. Although tormented by excruciating pain, a crucifixion victim could be expected to survive several days on the cross, shifting their weight from their feet to their hands, desperately yet vainly seeking even a modicum of relief. Yet it was not the pain, the shame, or the rejection He experienced that caused Jesus’ death. As Isaiah wrote, “The Lord… laid on him the iniquity of us all,” (Isaiah 53:6). He “bore our sins in His own body on the tree” (1 Peter 2:24). Paul wrote that “Christ died for our sins according to the Scriptures” (1 Corinthians 15:3).

It was the weight of the sins of the world that crushed the life out of Jesus. In order to hasten their death and prevent them from hanging on a cross during the hours of the Sabbath (John 19:31), the legs of the two criminals crucified with Jesus were broken. Crucifixion victims typically died from asphyxiation. As the Encyclopædia Brittanica records, “Death ultimately occurred through a combination of constrained blood circulation, organ failure, and asphyxiation as the body strained under its own weight. It could be hastened by shattering the legs [which was called crucifragium] with an iron club, which prevented them from supporting the body’s weight and made inhalation more difficult, accelerating both asphyxiation and shock.” This is why Pilate “marveled that He was already dead” (Mark 15:44). Jesus ought to have been alive when the Roman soldiers intended to carry out their grim task, but in a mere few hours, Jesus had died. He died for, and because of, our sins.

How hideous must sin be if the only possible remedy for sin had to be the death of the divine Son of God? One author wrote, “The cross is a revelation to our dull senses of the pain that, from its very inception, sin has brought to the heart of God” (Education, p. 263.1).

But the question remains: Why would Jesus, fully cognizant of the horror of sin, die for the human family? During a recent visit to the National Medal of Honor Heritage Center in Chattanooga, I read the story of Lance Corporal Kyle Carpenter, who served with the United States Marine Corps from 2009 to 2014. In November of 2010, while serving in Afghanistan, Carpenter used his body to shield a fellow Marine from the blast of an enemy grenade. Corporal Carpenter survived and has undergone more than 40 surgeries since sustaining his injuries. His act was truly selfless and done for the benefit of others. But unlike Jesus, Carpenter gave himself to save his friends, his fellow Marines. Jesus died for his enemies! “While we were still sinners, Christ died for us” (Romans 5:8).

John 3:16 gives us the answer to our question. “God so loved the world that He gave His only begotten Son.” Which brings us back to the verse I mentioned earlier. In it, Isaiah magnifies the words Jesus spoke to Nicodemus in John 3. Just 13 words, and they’re unforgettable. Isaiah writes in Isaiah 53:11, “He shall see of the travail of his soul, and shall be satisfied.”

Satisfied! Jesus looked down through the reaches of time, saw the results of His crucifixion, and was satisfied. Jesus allowed wicked men to apprehend Him because He was satisfied with what would follow. He endured inhumane mistreatment at the hands of men He had breathed life into, He hung on the cross with searing pain raging through His body, He bore the sin of the world… and He was satisfied. Satisfied that His death would purchase pardon for all who wished to be saved. Satisfied that the brutality He endured would be worth it in the end. Satisfied, because you would consider the story of the cross, and have the opportunity to come to faith in Jesus.

As the Christian world commemorates the death, burial, and resurrection of Jesus, Jesus Himself considers Calvary and His abhorrent, repulsive death, and is satisfied. The question now becomes, Are you satisfied? Are you satisfied with the love of God, the sacrifice of Jesus, and the certainty of everlasting life?

Jesus is soon to return to this earth. If you are waiting to see Him, waiting to spend eternity with Him, He will be satisfied again.