An Enemy Has Done This 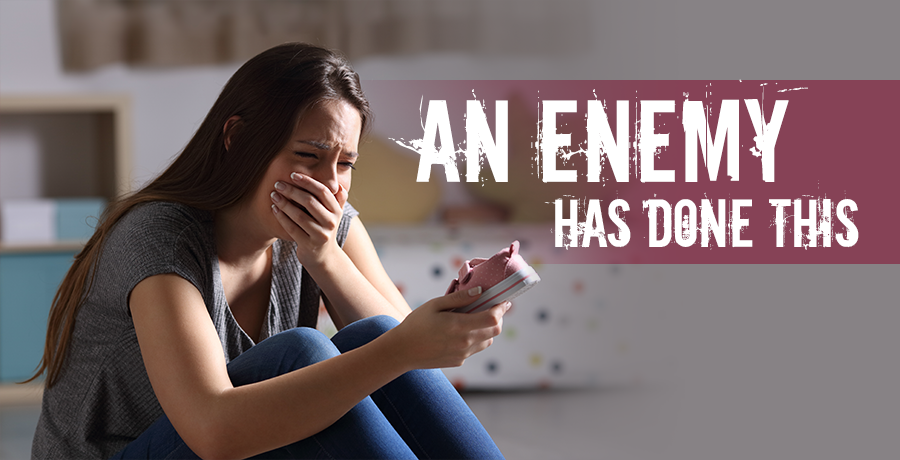 It’s a question I’ve often been asked. And it’s a tough one every time.

A woman I’ll call April wrote to me recently.

“When my daughter passed away at three months old, I was so angry with God. How does God give you something so precious just to take it away? I still love God, but I feel lost, almost like a pinwheel blowing in the wind.”

What would you say in response? It’s a question so many people have. I wanted to share the answer with you that I shared with April.

Thank you for writing. First, I want to say how sorry I am for your loss. I’m sure I can’t even imagine your pain, which has to be immense. I’m so sorry.

You’ve asked a question that ALL of us struggle with. The answer is simple, but it isn’t always satisfactory. At least, not in the heat of pain and loss.

God doesn’t take our loved ones away. In the parable of the wheat and tares, a man discovers his field has been pretty much destroyed, and he says, “An enemy has done this” (Matthew 13:28). It’s the enemy who has done this. There’s a horrible, angry devil who has spread sin and with it, sickness and loss and death.

Because we’ve been in a sinful world for 6,000 years, people suffer disease and loss. Elderly people deal with Alzheimers. People battle Parkinson’s. It’s awful. But it’s because of sin. Your precious baby girl somehow was afflicted with an illness or suffered an accident because the human family has been degenerating for millennia thanks to the devil’s rebellion. God weeps with you, and He hurts with you.

Could God have prevented this? Truthfully, yes, He could have. God has prevented much, much evil. So why did He not? Why did God not preserve the life of your baby girl?

What is important for us is to trust. To have faith. To believe that God is love (1 John 4:8), and to believe that our circumstances–as tragic as they often are–do not represent a lack of faithfulness on God’s part. April, God will see you through this. I know that might sound easy or trite or hollow, but He will. His strength will be there for you. He told the apostle Paul, “My grace is sufficient for you” (2 Corinthians 12:9).

And one day there will be a resurrection. You will see your baby girl again. You will hold her in your arms again. And you’ll have the privilege of raising her in heaven, where there will be no more sin or sickness or suffering or pain.

One more thought: there’s one person who knows more about this than anyone, and that’s God. God lost a child. His Son–who He had been with since eternity past–was cruelly killed by the people He came to save. His own people, in fact. God suffered the greatest loss we could imagine. A resurrection reunited the Father and the Son. One soon day, a resurrection will reunite a mother and her precious daughter. I know you’re looking forward to that day.

May God bless and keep you.

Pastor John Bradshaw
It Is Written