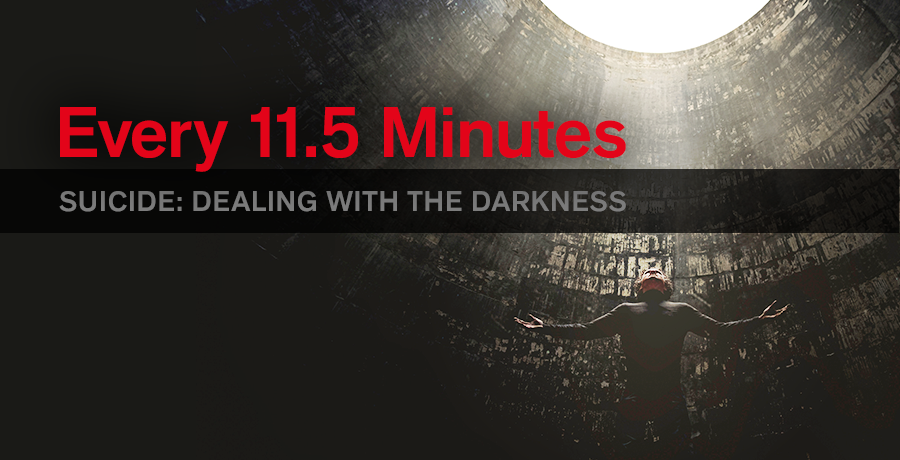 Several recent, high-profile tragedies have thrust an extremely painful subject into the forefront of the national consciousness.

In the United States, someone commits suicide every 11.5 minutes. And for every successful suicide attempt, there are 25 unsuccessful attempts. About 6,000 people commit suicide every year in the United Kingdom, but as bad as that is, there are more than 50 countries that have a higher suicide rate than Great Britain.

There are a lot of people hurting, a lot of people living without hope — and more than likely some of them are living within your sphere of influence. Most everyone has been affected by suicide, and it happens to people both in and out of the church.

Suicide is no respecter of age, race, gender, or social standing.

If you struggle with suicidal thoughts, or if you feel like your life is hopeless or that you don’t mean anything to anyone, you can know there are people who do care, and there are people who will help. And if you feel you need help, please ask for help. Speak to a physician. A teacher. A parent. A counselor. A pastor or other person with spiritual wisdom and experience.

I’d love to tell you faith in God takes away the kind of anguish that leads to suicide, but even people of faith can struggle. Mental illness and emotional struggles are real. So how do we approach this from a Biblical perspective?

Remember this: “Fear not, for I am with you; be not dismayed, for I am your God. I will strengthen you, yes, I will help you, I will uphold you with My righteous right hand.” Isaiah 41:10. That’s God saying He’s there for you.

In life, it isn’t that we want the struggles taken away entirely. We want strength to get through our challenges, our dark times. God promises you that. Don’t cave in to that impulse to think you’re not worth anything or that you don’t matter. There’s a very real spiritual battle going on that everyone is caught in the midst of, a battle in which the devil wants people to lose hope in God.

A friend of mine, a man I’ll call Phil, felt like he simply couldn’t go on. He had made plans to end his life and was driving to the place where he intended to do so. For some reason, Phil stopped to fill his vehicle with gas. While he was pumping gas into his truck, a man he barely knew saw him and called his name. When Phil responded, the man asked him what he was doing the coming Tuesday night. “Well, I don’t have anything planned,” Phil replied.

“I’d like to invite you to a Bible study at my house,” the man continued. “I’d just love it if you could make it.”

Phil attended the study and went back again and again. He surrendered His life to Jesus and went on to dedicate many years of his life to being a youth leader in his church. Phil often preaches in his local church.

Depression, loneliness, despair, deep pain, and feelings of worthlessness can push a person into some dark places. But regardless of the circumstances in your life, there is hope, because God offers hope and a future. An eternal future.

Don’t lose hope. If dark thoughts crowd your mind, or if you know someone battling with depression, seek help. And lean on God.