To commemorate the 500th anniversary of the Protestant Reformation, It Is Written returned to Europe. Two parallel series took place—one in Luther’s Germany where the Reformation began and the other in Rome, Italy, a place where much of the Reformation controversy centered. 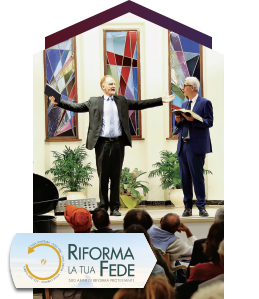 In Rome, from October 25 to 31, Speaker/Director John Bradshaw preached an evangelistic series titled Solo Cinque. Solo Cinque focused on the five premises of the Reformation, known as the Five Solas. These are five Latin phrases that emerged during the Reformation to summarize the Reformers’ theological convictions about the essentials of Christianity. Sola Scriptura (Scripture alone); Sola Fide (faith alone); Sola Gratia (grace alone); Solus Christus (Christ alone); and Soli Deo Gloria (to the glory of God alone). “It’s really a special privilege to be able to share the message of the Bible in Rome. The city is so historic. So much has happened here that impacted Christianity and the world. God has worked through these meetings,” John said. Mariarosa Cavalieri, It Is Written’s evangelism coordinator in Rome, trained and organized over 100 members from five churches across Rome for the series. They spent more than one year preparing for the bridge-building series, Solo Cinque, which was held barely one mile from the Vatican. The series climaxed on October 31, the day when 500 years ago Martin Luther nailed his history-changing theses.

The short October series has paved the way for a longer series which will follow in May 2019. There have been powerful evidences of God at work in Rome. In the meantime, the devil was also at work trying to slow down the positive momentum. Only one month before the series, the largest participating church had a fire, possibly caused by arson, that caused considerable smoke damage. The members, however, were undeterred in their service to the Lord.

“The church was full on opening night and got more full every night. People were so thankful to hear that eternal salvation is graciously given by God to all who desire it: No penance or works required. Now we are getting ready for the full-message series in May 2019. It’s exciting to watch God at work,” It Is Written Evangelism Director Yves Monnier said. 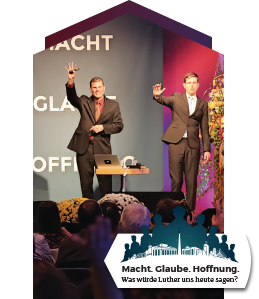 heute sagen? (Power. Faith. Hope. What would Luther say to us today?). The series ran for three weekends from October 13 to 29. Pastor Flickinger explored the origins of the Reformation and the similarities between Luther’s time and our world today.

The series was the culmination of months of much work, prayer, and diligent preparation. Under the faithful leadership of Hartmut Winschaft, It Is Written’s evangelism coordinator in Stuttgart, hundreds of people attended the series each night. A broad advertising campaign invited the entire city to Liederhalle, a convention center in the heart of the city, to hear God’s word resonate like it did 500 years ago.

“Five hundred years ago, Martin Luther kindled the fires of a reformation that has impacted nearly every area of life in the Western world,” Eric Flickinger said. “Now, we have had the privilege of carrying his torch forward in Germany, the very birthplace of the Reformation.”

Please pray for the people of Germany and Italy. To donate to this evangelistic outreach, visit itiswritten.com/give.