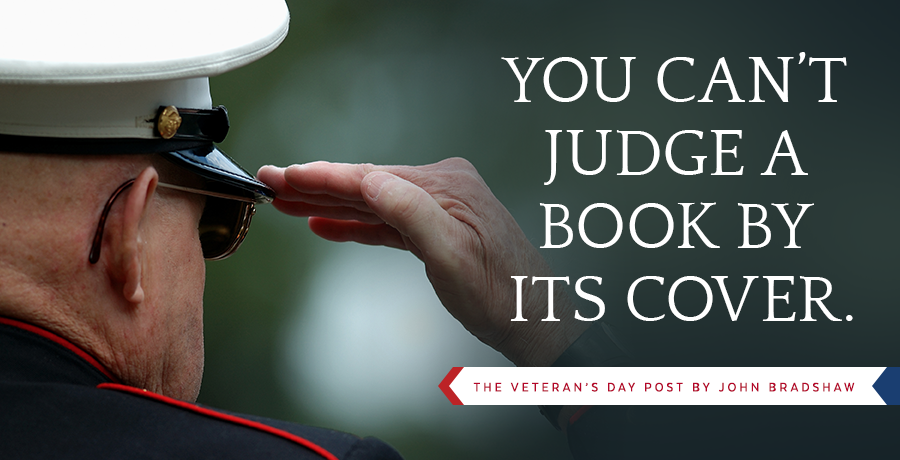 I learned long ago that behind many people is an extraordinary story.

I spoke with an employee in a furniture store years ago in North Carolina, an unremarkable-looking guy with a “Why howdy, Sir,” demeanor and a hayseed accent. As we spoke he referred to his time in the service.

“Thank you for your service,” I said to him. “What branch were you in?”

“Navy,” he said, managing to turn two syllables into three.

I have a brother who served in the navy. I could imagine old Hayseed swabbing the decks. He sure didn’t strike me as a ship’s captain kind of guy. “And what did you do in the navy?” I enquired.

I definitely wasn’t expecting his answer.

“I was a fighter pilot.”

I thanked him again and made a mental note to not judge books by their cover. Hayseed had actually been a US Navy Commander and had served his country with distinction.

Last night I bumped into a man who told me he was looking forward to seeing Hacksaw Ridge, the movie about Desmond Doss, the “conscientious cooperator” who received the Medal of Honor from President Harry Truman after World War II.

He said something that grabbed me: “But I wonder if it might bring back some unpleasant memories…”

He told me he had been a medic in the service. “During Vietnam.” He worked in factories after leaving the military.

He said, “I’m not thinking the violence in the movie would really bother me because we saw so much of that stuff in Vietnam.” I didn’t have to ask him to go on. He seemed to almost need to.

“You know, we’d have body parts brought to us. Men had lost them out on the field. All kinds. We’d send them on to the morgue.” He went on. “I spent so much time with my hands inside men’s bodies as we tried to save their lives or put them back together… I don’t think the movie could be any worse that what I saw.”

I could only imagine. And unfortunately, he may well be right. Hacksaw Ridge likely is no worse than what he saw in the military. And what he saw and experienced was real—not Hollywood special effects.

This humble man—past retirement age but working at a big box store—was a Vietnam veteran who carried with him vivid memories of body parts and dead or dying men, and of having limbs in his hands and his hands inside chest cavities and torsos… This everyday man had experienced the extraordinary in the service of his country.

Veteran’s Day is approaching. Those of us who have never served? We just don’t really have a clue.

Many vets have been though extremely difficult experiences in the line of duty. You’d barely know, looking at them. But they served, they lost friends. Many were injured, scarred. They saw what they saw and did what they did and came home and got on with their lives and lived with their “unpleasant memories.”

If they cared to tell it, theirs would be an extraordinary story.