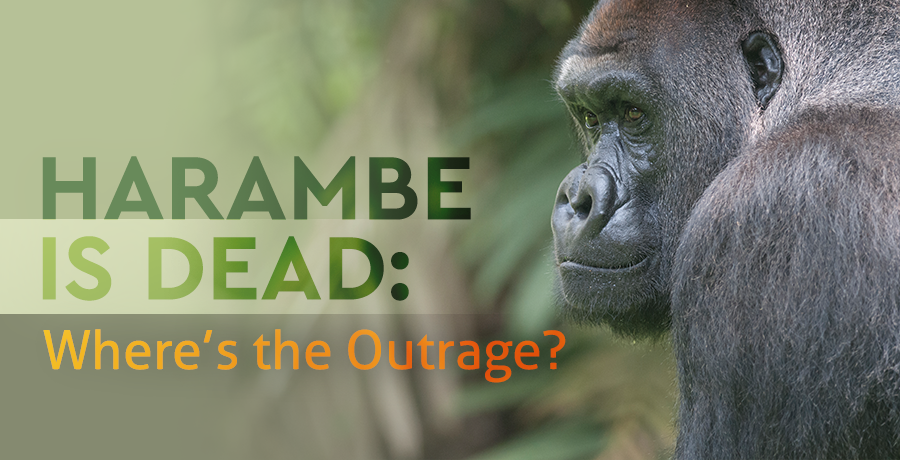 Harambe is dead. And that is heartbreaking.

Western lowland gorillas never gave us a lot of trouble during our zoo years (which aren’t entirely over, incidentally). Except for one time at the absolutely magnificent Henry Doorly Zoo in Omaha, Nebraska, when a fully-grown male silverback rushed to the thick glass window in his enclosure and pounded on it as my wife approached. It about scared the life out of her. We don’t know what it was that agitated him, but we saw first hand that you don’t want to get on the wrong side of a gorilla. I certainly wouldn’t have wanted to be on the other side of that glass.

Several days ago a four-year-old boy got onto the other side of the glass, as it were. The story seems to be that he told his mother he was going to get into the moat around the gorilla enclosure. Naturally enough she told him he would do no such thing, and then—naturally enough—she was distracted by other children, according to reports. In that minute—more than enough time for a four-year-old—the boy slipped away into the gorilla enclosure. Anyone who knows four-year-olds can imagine it happening.

Boy meets gorilla. Similar things have happened in the past and the outcomes have been, on occasion, remarkable and touching. Gorillas have been known to protect children who have fallen into their enclosures. Wouldn’t it be wonderful had that happened in Cincinnati?

Well, some people think that’s exactly what happened, saying Harambe appeared to be protecting the four-year-old boy. However, wildlife expert Jack Hanna said, “The power this animal has is beyond comprehension. They’re a magnificent creature. There’s no doubt in my mind that that child would not be here today if they hadn’t made that decision at the Cincinnati Zoo.”[1. http://www.ew.com/article/2016/05/30/jack-hanna-harambe-gorilla-death]

Some said, he said. Predictably—this being the age of excoriation and condemnation—a mass of people have criticized and castigated both the mother of the child and the Cincinnati Zoo[2. We want peace on earth, and we want to digitally hang, draw and quarter those that disagree with us. As a society we’ve decided we dearly value our uncivil rights.]. The mother should never had allowed her child to get into the gorilla enclosure—you don’t say?—and the zoo should never, ever have taken the life of the beautiful silverback. But putting blame aside—if we could—let’s remember what that situation was. A child appeared to be in danger. Grave danger. What zoo official would have decided to try to convince Harambe to turn the child over, and then hope for the best? There’s no way in the world that decision could have been made. If it was—and if today the internet was aflame with video of a massive gorilla tearing a child apart—we’d all be traumatized and angry beyond description.

A decision had to be made between two individuals: a 400-pound gorilla and a 35-pound boy. The child’s survival was paramount. The decision was made that the gorilla had to die.

Ghastly. But once the boy went into the enclosure: unavoidable. Harambe died so a four-year-old could live. The response? In many quarters, outrage.

The death of animals can be hard to take. A zoo in Copenhagen euthanized a healthy giraffe in 2014[3. To prevent inbreeding.] and there was what CNN described as widespread outrage.[4. Four weeks later the same zoo put down four healthy lions.] This is because animals are remarkable. They are masterpieces of creation. I’ve experienced the indescribable joy of holding a young Kiwi bird in my hands[5. Unbeatable. Incomparable. Amazing. Awesome. Feel free to add your own superlative.], I’ve walked with lions, and I’ve ridden among impala, giraffes and zebras. The idea of killing a healthy, magnificent, powerful, majestic gorilla? Ouch. No wonder people are upset. But, as cold as it read when reported in the news, accidents—in the words of the unfortunate boy’s mother—happen.

Once the child crossed that line? Game over for Harambe—there was no other way. But a gorilla being killed as a result of human… distraction? People get angry over that. Outraged.

So let’s think about this together.

Six thousand years ago, two people who knew better ate from a tree they were told was absolutely out of bounds. Once they did there was no going back in terms of the plan of salvation. Once Adam and Eve ate the forbidden fruit, the death of Jesus was assured. Not the death of a gorilla. The. Death. Of. The. Son. Of. God.

In addition, it wasn’t ‘forced’ by a God who gave bad news to His Son and told Him that, sorry, there was just no other way. Jesus “gave Himself” (1 Timothy 2:6). 1 John 3:16 says Jesus “laid down His life for us.” Because two people made the incredibly irresponsible, careless, reckless decision to eat a piece of fruit they were explicitly told they should not consume, Jesus—the Creator of the world (John 1:3)—died.

It wasn’t just that He died. He was crucified, a method of execution designed to cause as much pain as possible. Cruel and unusual punishment to the max.

Now, with the greatest respect to Harambe, where’s the outrage?

You’ll recall the death of Cecil the lion, killed by an American hunter on July 1 in 2015 outside Hwange National Park in Zimbabwe. While in Zimbabwe this past March, I asked several people from varying walks of life about Cecil’s death. They told me it barely registered in Zimbabwe. The internet was almost burnt down owing to the heat of the outrage over the death of that poor lion, but the locals didn’t lose any sleep at all. While the issues are complicated—hunting, money, conservation, employment, the ethics of the manner in which Cecil was killed—what was clear is that people all over the world were livid Cecil had been killed. By a hunter. Who had paid a lot of money for the “privilege.”

However, what amused one Zimbabwean friend of mine was that—in his words—while Cecil was one (beautiful, and old) lion, and while the internet hemorrhaged after his death, the lion population in Africa is plunging dramatically. My friend told me that a man in Kenya who farmed six goats recently poisoned eight lions to protect his livelihood. Think about that for a moment.

A Zambian government minister was reported as saying that, “the West seemed more concerned with the welfare of a lion in Zimbabwe than of Africans themselves. In Africa, a human being is more important than an animal. I don’t know about the Western world.”[6. https://en.wikipedia.org/wiki/Killing_of_Cecil_the_lion]

Her point was that while it was nice people got upset over the death of Cecil—momentarily—a bigger picture is being ignored. The lion population continues in absolute free fall.

Harambe’s death reminds me that there’s another bigger point being missed. While the world is livid over the very unfortunate death of an animal, there’s a real, bonafide, genuine tragedy of immense proportions being ignored. The Son of God died a needless death on a cross two thousand years ago. He shouldn’t have had to, but He did because of the selfish actions of two people who couldn’t keep out of what they shouldn’t have been into.

Fortunately there’s a massive silver lining. Just as Harambe’s death secured the survival of a four-year-old boy, Jesus’ death made possible the eternal life of an entire planet. All seven billion people alive on Earth today can live eternally if they wish to because Jesus laid down His life.

However, His death is being ignored, forgotten, misrepresented, ridiculed, and under-reported. As a result, multitudes will only have a brief life on this Earth and nothing at all beyond the return of Jesus.