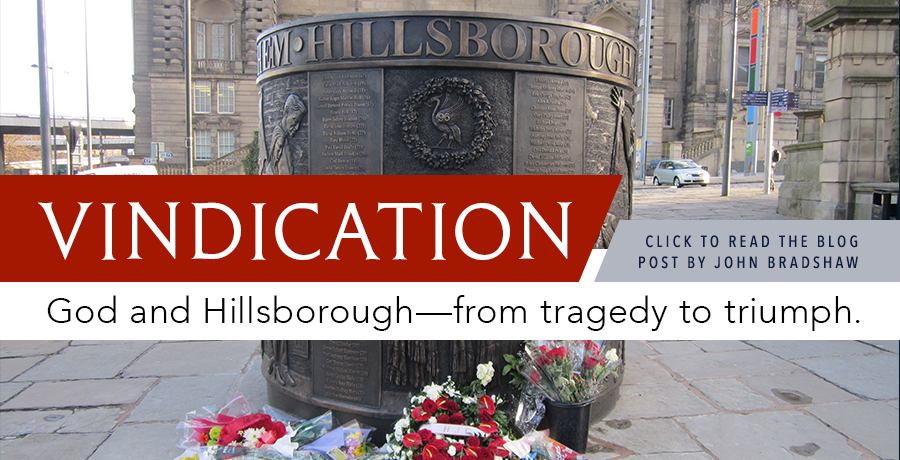 In 1989, England’s Liverpool Football club was playing Nottingham Forest in an F.A. Cup semi-final at Hillsborough Stadium in Sheffield, 35 miles east of Manchester in South Yorkshire.  The cheapest tickets sold in the stadium were for admittance to the terraces, a typically-boisterous  area without seats where the most loyal fans would stand for the duration of the game.  For many, especially young fans, watching from the terraces was an integral part of football culture.

But something went tragically wrong at Hillsborough that day in April as thousands of fans poured into the stadium.  In the absence of adequate crowd control or police or other match-day security to manage the crowds entering the stadium, fans surged into terraces that were already filled to capacity.  Spectators in the terraces – caged behind metal barriers – had no way of escaping the intense crush in which they were caught.

The results were tragic: 766 were injured that day and 96 people killed, the majority of them from compression asphyxia, a term which begs no definition.

That the tragedy occurred during a televised event heightened the seriousness of the disaster and the sickening sense of what was a national tragedy.  With soccer hooliganism at the time a blight on both English football and society, it was easy for authorities to point the finger of condemnation and blame Liverpool supporters for killing 96 of their fellow football fans.

Condemnation of Liverpool fans was savage, led by some of the most prominent voices in the media. Many of the fans who were there that day struggled to cope with being blamed for the deaths of their own friends.  Some did not.  Several who were on the terraces at Hillsborough on April 14, 1989 and who had themselves been caught in the crush, committed suicide.

But twenty-seven years later, on April 26, 2016, a jury in a courtroom in Warrington, east of Liverpool, ruled that the fans themselves were NOT to blame for the deaths of the 96 victims.  Instead, the police were found to be negligent and culpable in the deaths of the unfortunate soccer supporters.  There had been, for almost three decades, a monumental miscarriage of justice, but now the dishonesty of the key figures in this horrible tragedy was finally revealed in its true light.

It took 27 years, but finally the truth was told.  And that’s the thing with the truth.  Sooner or later it comes to light.

Since the fall of Adam and Eve in the Garden of Eden, a vicious lie has been perpetuated, a lie claiming God is responsible for the enormous amount of sin and misery in the world.  “If only God had stopped the devil.”  “If only God had stepped in and prevented sin from happening in the first place.”

If only God, then we wouldn’t be in this mess.

Let’s think that through.

Could God have stepped in and simply stopped sin from entering the universe?  Being God, there’s no doubt He could.  But what would have been the ramifications of God overruling the sovereignty of personal choice?

God-given freedom of choice is valued by most people above almost all else and says that (subject to appropriate laws) you can believe your own conscientiously-held views, express your opinions without fear of retribution and determine to a large degree the trajectory of your life.  Even if the decisions you make might not ultimately be in your best interest, you have been granted freedom of choice and given authority by God to make those decisions if you choose.

For God to intervene and prevent Adam and Eve from eating the forbidden fruit would have meant God would have removed their freedom of choice.  They would have been reduced to being robots, capable of doing only what God dictated.  Although God urged them not to do so, the decision to eat from the tree of the knowledge of good and evil was ultimately theirs.

Reprogramming Adam and Eve – or the devil, for that matter – would have been the end of love.  Love only exists when it is given voluntarily.  A husband who buys his wife flowers can’t be said to be buying them out of love if she is holding a gun to his head.  Love is not love if it isn’t voluntary.

If God had destroyed the devil after Lucifer had gone down the path of rebellion, the angels in heaven would have served God out of fear rather than love.  Again, choice would have been removed from the equation.  Without a complete understanding of the love of God and the issues involved in Lucifer’s rebellion, the destruction of Satan would only have served to instill fear in the hearts of heaven’s holy angels.  The universe would have been plunged into chaos.

When sin entered the universe, God only had two viable options; only one of which – while horrendously expensive – was workable.  He could either destroy the devil and imperil the security of the universe, or…

Or, God could choose to let sin run its course.  That would mean that should people turn from God and embrace the enemy there would be wars and violence, famine and sickness, and death and distress as sin took up residence in the human heart.  Should, however, humans yield to God and trust Him and serve Him, there would be nothing to fear.  But in letting sin run its course, God gave the universe a chance to see not only the true character of Satan, but also the depths of the love of God.

God is often held responsible for death and destruction.  “Why did God allow that tsunami?”  “Why did God not prevent that car accident?”  It’s no different than the British Police spinning the Hillsborough tragedy in such a way that innocent fans were considered culpable for something in which they had no part.  It suited the authorities to deflect blame from themselves and towards a group of marginalized people unable to defend themselves against the damning charges against them.

No, God is not responsible for death and sin.  God is love and He loves every person on Earth.  The death of Jesus on the cross reveals that sin has cost God far more than it could ever cost you or me.  And it reveals that far from being responsible for sin, God has done everything He can to save us from sin and its effects.  He “so loved the world that He gave His only begotten Son”  (John 3:16).

After almost thirty years, the 1989 football fans at Hillsborough have been vindicated.  And when Jesus returns and the saved are saved and the lost are lost and it is finally and forever seen that God has been entirely just in His dealings, God will be vindicated too.