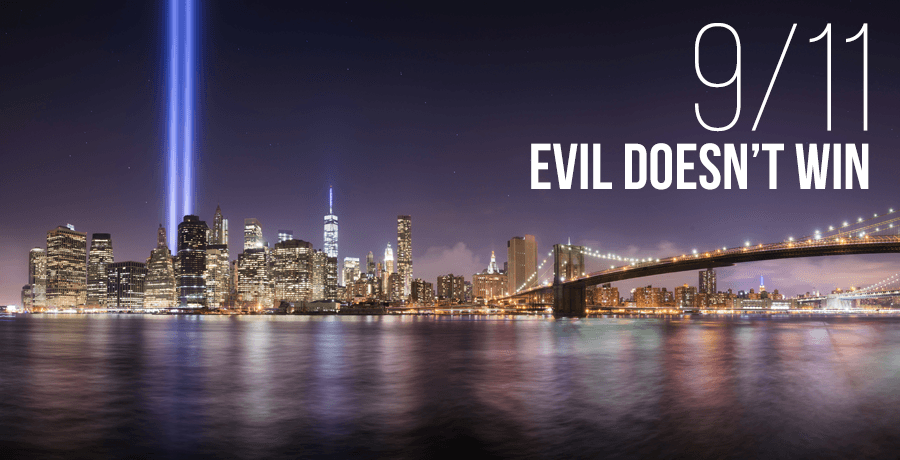 I have visited Auschwitz twice.

The first time it was late spring and the pleasant weather at the time made it difficult to truly comprehend the horror of the place. A month later it was freezing cold, there was snow on the ground and it wasn’t hard at all to begin to understand something of the kind of hell Auschwitz actually was. My wife was taking photos of a display of shoes when it dawned on her she was focusing the camera on the shoes of a small child She couldn’t keep from weeping. (Click here to watch “Never Again?,” filmed on location at Auschwitz.)

The numbers of people who perished—the vast majority of whom were Jews, ‘guilty’ of possessing the wrong ancestry—combined with the truly tragic accounts of loss and brutal hardship and inhumane living conditions, cannot help but affect you deeply.A Polish historian who assisted us with our filming that day admitted that the work of being a tour guide at the former Nazi concentration camp leaves many people depressed and bitter.
Our tour guide during our second visit had been terribly scarred by his work at Auschwitz, confessing to us that he lived with little hope and without belief in the decency of humanity.

But as we were preparing to leave Auschwitz—now the quaint Polish town of Oświeçim with a population roughly that of Minot, North Dakota—something occurred to me that gave me great hope.

The Auschwitz-Birkenau complex was a key part of Hitler’s “Final Solution,” his attempt to eradicate Jews from Europe. It was his best shot at an utterly incomprehensible act. Backed by the might of his own war machine, he attempted to annihilate a defenseless group of innocent people. And failed.

Since Hitler’s death in 1945, evil has surfaced in many forms on a massive scale. Despots such as Josef Stalin, Pol Pot, Nicolae Ceausescu, Slobodan Milosevic, Osama bin Laden, and others are remembered with derision and contempt. All of them were responsible for the evils of tyranny and death. And all of them are dead.

Fourteen years ago, on September 11, 2001, four passenger planes, containing a total of 246 passengers and crew, were hijacked by 19 terrorists. Two of the aircrafts were crashed into the World Trade Center in New York City; one was flown into the Pentagon outside Washington, D.C.; the fourth plunged to the ground near Shanksville, Pennsylvania after passengers attempted to overpower the hijackers. Almost 3,000 innocent people were killed in history’s worst terrorist attack.

It certainly inflicted heavy losses. It caused an enormous amount of pain and grief. That awful day has altered the way of life for virtually everyone living in the western world.

My then-much-younger son once asked me if I thought society would ever return to pre-9/11 airport security. I was grateful for the question. He was still too young to understand the effects of evil.

But evil didn’t win. Society marches onwards. Security measures have increased. Insecurity has increased. But the world is determined to press ahead against an enemy that will never be permitted to win. Yes, our service personnel continue to risk their lives in places far from home, terrorist attacks are still being carried out, we dutifully allow ourselves to be x-rayed while going through security, but no one believes the terrorists are ultimately going to win. They simply won’t. They simply can’t. Evil doesn’t win.

The Bible presents a scenario that has, in recent years, become significantly more believable.

Incredibly, the world not only follows this power, but yields to it. Worships it.

Revelation 13:8. “And all that dwell upon the earth shall worship him, whose names are not written in the book of life of the Lamb slain from the foundation of the world.”

And then things go completely awry.

Maybe once we might have found it hard to believe such a scenario is even possible. Now? Now we no longer question the limits of humanity’s evil. And in a world racing to the bottom morally and socially, it even appeals to reason that a power might emerge that could win the hearts of the people of the world, only to go rogue and lead the planet into chaos and ruin.

Daniel wrote about “a time of trouble such as never was since there was a nation” (Daniel 12:1). Daniel and Revelation both speak of a time when the world unites with evil before turning to eradicate the followers of God.

One can imagine hope was in short supply for those living through the hell of the holocaust, or for victims of Stalin’s pogroms in Russia, or of the killing fields in Cambodia. But the darkness of that experience eventually gave way to the light of a new day. Before Jesus returns, things are going to be dark indeed for followers of God and His word. It is often said that it is darkest just before dawn, but dawn does come. And in the close of time, it will be a dawn such as the universe has never seen.

“And I saw heaven opened, and behold a white horse; and he that sat upon him was called Faithful and True… And he hath on his vesture and on his thigh a name written, KING OF KINGS, AND LORD OF LORDS” (Revelation 19:11,16).

Jesus returns! Paul wrote to Titus calling this event “the blessed hope” (Titus 2:13). He wrote to the Thessalonians of a day when “the Lord himself shall descend from heaven with a shout, with the voice of the archangel, and with the trump of God: and the dead in Christ shall rise first: Then we which are alive and remain shall be caught up together with them in the clouds, to meet the Lord in the air: and so shall we ever be with the Lord” (1 Thessalonians 4:16,17).

We live in a world that, for six thousand years, has been marinating in sin. But in the words of the old spiritual, “There’s a better day a’comin’!” Jesus really will return to this earth. We can’t know precisely when, but there’s more than enough reason to believe He’s returning soon. Very soon.

In the meantime, we remember 9/11, we honor those who lost their lives on that day, we remember our service men and women making enormous sacrifices to serve their country, we mourn the very existence of terrorism and war and death and destruction.

We remember. And today we remember that evil doesn’t win.