Oct 2020
AUTHOR Cassie Hernandez
NEXT POSTYou Can’t Be My Friend If You Vote for…
PREVIOUS POSTThe Last Mission Trip: Video 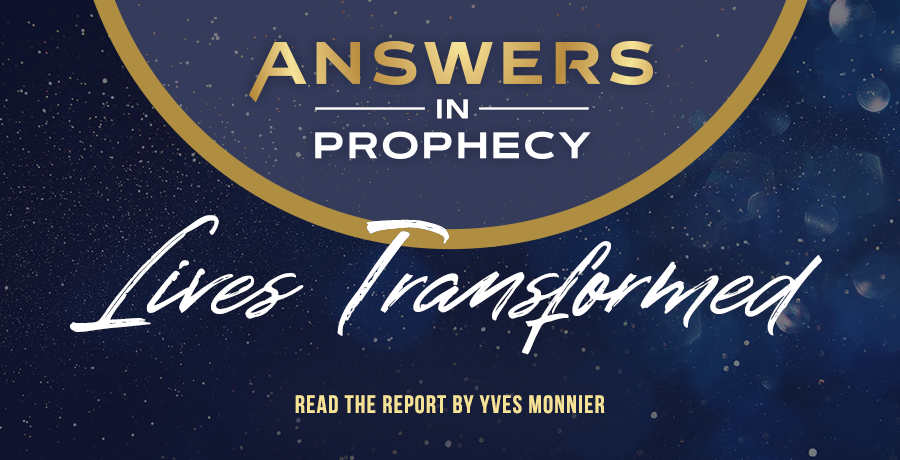 Uncertainty seems to be the new standard. No one is quite sure about what to expect tomorrow. The global COVID-19 crisis has impacted people as nothing else has in decades. Questions abound. Big questions like where is the world headed, whether God cares, and will this mess ever come to an end. Pastor John Bradshaw recently tackled these questions in a 10-part virtual series called Answers in Prophecy.

Over 13,000 people registered to watch Answers in Prophecy, the first of six virtual series that It Is Written is conducting over the next 13 months to lead individuals to God. Since people cannot or are less likely to come in person to meeting sites, we are coming to them through the internet. Just log in, watch, and be blessed. And people have been and continue to be blessed.

Rose,* who had been diligently studying the Bible, was so excited to watch Answers in Prophecy. Just a few days after the series concluded, she was baptized.

Pastor Bill is thankful that one of the Answers in Prophecy viewers is a person who had walked away from God many years ago. This series is giving Pastor Bill the opportunity to reconnect with her.

A few weeks ago, Dana wanted to take her life. However, she stumbled upon Answers in Prophecy, and it totally changed her outlook on life. She’s now studying the Bible and preparing for a life with Jesus.

As a member of the Answers in Prophecy team, Betty made a courtesy phone call to June, who had registered for Answers in Prophecy, to see whether she had enjoyed the series. June did not remember ever registering. That did not deter Betty from asking if there was anything she could pray with June about. That’s when June opened up and shared about her daughter’s battle with cancer. Betty prayed and has been praying on a weekly basis with June. June told Betty, “I don’t know how I got on your list, but I’m glad I did.”

Warren was spiritually listless. He went through the motions of going to church but that was the extent of his relationship with God. Then he watched Answers in Prophecy, and it was like a light came on. He’s not been the same ever since.

Even though the Answers in Prophecy presentations were released from October 9 to 21, they can be viewed on demand at answersinprophecy.com. Discover for yourself and tell others about this life-changing series that digs deep into the Word of God for answers.

As you savor Answers in Prophecy, mark your calendar for the next virtual six-part series entitled, NO LIMITS: A Life of Power. The NO LIMITS presentations will be released from January 24 to 29. It’s the kind of series that will help you experience God’s power in your life. What a way to start the new year! More details about NO LIMITS will be released soon.

*All names have been changed.