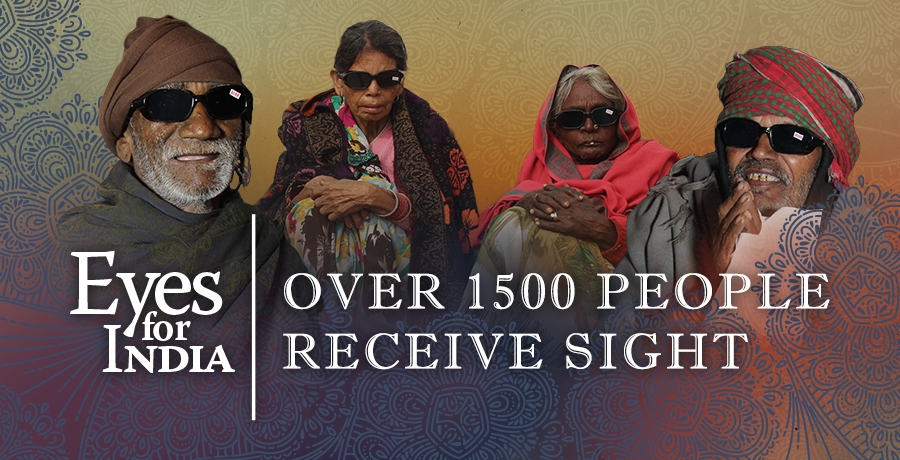 The Eyes For India team was invited to a Hindu temple this January to do the work of Jesus in opening the eyes of blind people. From January 3 to 17, the medical team conducted cataract eye surgeries in the remote forest village of Hardiakol, district Barabanki, in the northern state of Uttar Pradesh, India’s most populous state. Led by Dr. Jacob Prabhakar, It Is Written’s humanitarian Eyes for India project seeks to restore sight to the 15 million blind living in India through a simple cataract surgery and intraocular lens implantation. “This initiative will help as many as possible and restore their hope and sight,” said Dr. Prabhakar.

More than 2,500 blind people initially registered for treatment, and 60 percent of those were blind in both eyes. Most patients are very poor with hardly any warm clothing and must travel long distances by road and train. Thick fog created zero visibility and caused trains and buses to be canceled. Many patients who had initially registered were unable to return for treatment. Most of the patients that did make it back to the temple slept outside on sand and hay that served as beds as they awaited their turn for surgery.

Once treatment began, 250 patients were called for surgery each day. It Is Written Partner Dr. Jason Leng, an ophthalmologist from Pacific Cataract and Laser Institute, Chehalis, Washington, participated in the mobile camp for the second time. Dr. Leng, Dr. Prabhakar, and the rest of the medical team completed diagnostic tests for each patient and then the cataract surgery with an intraocular lens implantation. Postoperative patients stayed in a makeshift hall for care, postoperative dressings, and instillation of eye drops. Patients were discharged on the second postoperative day with specific medications and dark protective glasses. The patients are called for postoperative follow up each week for the next six weeks and then advised on the use of bifocal glasses.

By God’s grace, the eye camp was a huge success, despite many unforeseen challenges. A total of 1,672 cataract surgeries were performed, many for children and young women who are the breadwinners of their homes. The patients who missed their operation due to weather are scheduled for surgery during the month of March.

But providing eyesight is only the first step in the the work of our medical team. About 80 percent of the state’s population are Hindus, and 18 percent are Muslim. Many of these patients have never heard about Jesus. Patients were given the book Steps to Christ in their own language and a health booklet. The team prayed with patients and conducted worship services daily in the temple complex.

“Thanks are due to the Eyes For India sponsors for their generosity in making this possible,” said Dr. Prabhakar. “The smiles and the joy the patients demonstrate following surgery is noteworthy! They go back home being able to carry on with work and their daily livelihood. Leading an independent life makes all the difference. We are so grateful! Eyes For India has been such a blessing and we thank God for this amazing ministry.”

Thousands of lives have been changed in just days by a simple eye surgery. People who were once blind are now able to see because of the kindness of many donors who make this happen on a regular basis. Join the Eyes for India team in bringing sight to the blind by donating today.