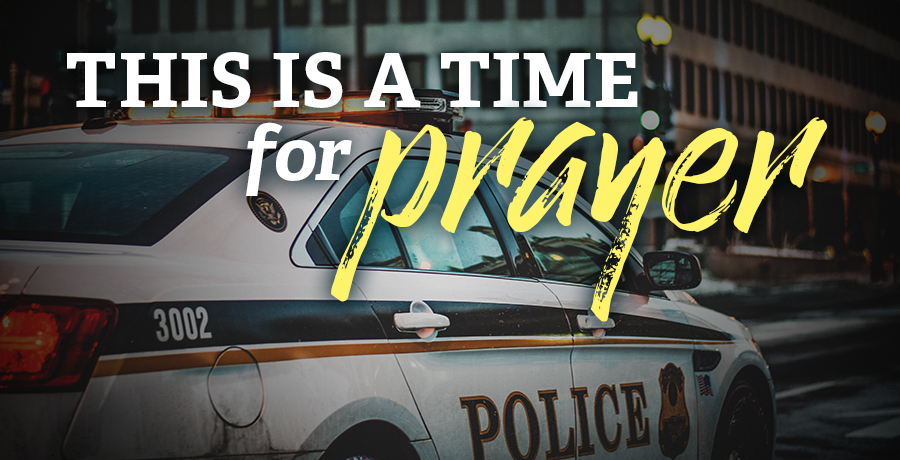 Two recent horrific attacks are simply more evidence that our nation and our world are caught in the grip of senseless, destructive violence.

More than 80 people were killed less than a week ago when a deranged man drove a large truck into a crowd gathered to enjoy the Bastille Day fireworks celebration in the South of France. The randomness of the attack—a truck? families out enjoying a fireworks display?—introduces a whole new level of “what in the world?” to the madness the world is enduring as terrorists kill and maim indiscriminately.

And when reports surfaced a couple of days ago that three police officers had been killed in Baton Rouge… I can’t imagine I’m the only person who thought, “Is this ever going to end?”

While there are complex issues behind the unrest, disaffection, and anger plaguing society, we crave a way out of the mayhem.  And we realize that fifteen years after 9/11 and after the more recent tragic deaths of unarmed—and armed—black men, we may be further away from a solution to the crises we face than ever before.

Politicians have been working for years to rid the world of the terrorism that has inexorably altered our way of life here in the United States. [1. Airport security measures and heavily armed police on the streets of New York City on the Fourth of July tell us that yes, life has changed here. Less obvious measures tell us the same thing. And there won’t be any going back.]

And yet mass murderers in Orlando (49 killed, many wounded) and San Bernardino (14 dead, 22 seriously injured) and Bangladesh (23 murdered) and Baghdad (more than 300 dead, hundreds injured) and and and and, continue unabated.

Politicians certainly know what to say. “We will not let this prevent us from going about our daily lives.” Which is fine for those who still have a daily life to go about. After San Bernardino politicians said, “We must stop gun violence now,” and that gun violence “must stop.”

Of course, that approach will usually work for parents trying to convince their three-year-old not to draw on the walls of the living room. But gun violence?

Following the killing of five policemen in Dallas, Texas, at a protest march, everyone near a microphone or a Twitter feed spoke up and said exactly what you’d expect. An actress: “We must love even harder. A politician: “We must learn to love each other.” Al Sharpton: “We must be against all killings period!” Another actress: “Please everyone stop killing each other.” Many spoke out strongly against the killing of police, saying that even the tragic deaths witnessed in Baton Rouge, Louisiana, and St. Paul, Minnesota, did not justify taking the lives of our dedicated men and women in blue.

There wasn’t a person in the United States who didn’t hear those appeals.  And yet here we find ourselves dealing with what has just happened in Baton Rouge.

No matter how hard politicians try, no matter how many appeals are tweeted, no matter how much handwringing and protesting and demanding, we live in a world where haters—as the poet wrote—gonna hate. As the brother of a slain police officer said, “It’s coming to the point where no lives matter.”

The prophetic picture painted in the Bible is that of a glorious future. Preceded by unfathomable difficulty.

In the meantime, believers ponder the best course of action. Is joining a protest line going to change anything at all? Well, it just might. Is tweeting a pithy comment about racism or hate or crime or policing going to make a difference? Maybe. That’s possible. Can the president actually say anything that is going to affect the wider situation for the better? We hope. His call for people to “temper our words and open our hearts” was the sort of comment a president is remembered for years later, and his assertion that “we’re going to have to keep on doing it again and again and again” [2. The “it” being proving through words and deeds that we will not be divided.]was a statement that realistically portrays the complexity of the journey from nation divided to a nation united.

But really? Really, the only hope for a people or a nation is to petition the God of heaven to intervene. Even though tweets claiming “our thoughts and prayers are with the people/police/families of X at this time” are ubiquitous [3. I’ve never figured out what “sending out prayers at this time” even means. Can you do that? “Send out prayers” to someone? I think not, actually.], prayer simply is the best hope for humanity in its battle against the tide of evil.

Which is not to say prayer is a replacement for protests and politics and policing. A call to prayer is not a call to inaction. When dynamic faith in God undergirds personal and public action it brings power and transformation. The God who hears prayer doesn’t respond in silence. Prayer is frequently answered with a call to action.

A crowd of people who pray before (or while) protesting is unlikely to engage in mindless violence. An angry man who prays is not a man who will take a gun and shoot defenseless individuals. A police officer who prays in the line of duty may well hear God’s Spirit urging him or her to not pull the trigger when the situation doesn’t warrant the use of such force.

The wise man stated that “righteousness exalts a nation” (Proverbs 14:34). And God made an incredible promise—a promise—when He said in 2 Chronicles 7:14, “If My people who are called by My name will humble themselves, and pray and seek My face, and turn from their wicked ways, then I will hear from heaven, and will forgive their sin and heal their land.”

Our lands need healing. Human hearts need the healing touch of God. And any attempt at bringing the country or the world to any semblance of normality and unity is doomed to fail if not sustained by a commitment to pray and a surrender to God.

While this earth will never be heaven and although troubles will continue until Jesus returns, it is only faith in Christ will see His Spirit break through the forces of darkness that are wreaking havoc in homes and communities across the country and around the world. When we pray God will hear. When He hears, we will act. And people who act under the aegis of God’s Spirit are not people who will perpetuate killing, hate, racism and violence.